Film artist Kurt on Sense8 and other work 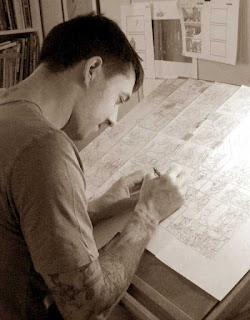 Click here to read the entire interview with Kurt

Concept and storyboard film artist Kurt van der Basch is surely a name that many in the Prague art and film scene would recognize. Originally from Canada, he moved to Prague to pursue a career in art which inevitably led him to film.

Like many of us expats, he began teaching English. Kurt’s journey and career has been incredibly diverse and I’ve personally been looking forward to this interview for some time.

On top of that, I’m also a major movie nerd so editing and listening back to this interview took a while – there were moments that I had to say to myself “Ryan, just shut up …” From working on recent Prague-based films like Child 44 to sketching 100s of storyboard frames for the new Netflix series Sense8, there are some interesting insights into the film industry in Prague and Central Europe… Not to mention some of Kurt’s early obsessions that got him into drawing in the first place. Enjoy!

Where are you from originally?

The east coast of Canada, Nova Scotia … Halifax. Well, not really from Halifax, but from a suburban little town near there. …But we moved around a lot.

And what are your greatest memories of growing up in that part of Canada?

The landscape and the weather. The long winters, meter-high snow.

Do you miss the snow?

Sure, because I’m not into driving so it’s never really affected my day. I just love it. And there’s something cozy about the snow reflecting off the ceiling too — it kind of lights up a whole room.

What did you want to be when you were a kid?

I really wanted to be an Egyptologist. I had that worked out for years. I took it so seriously. I even had a newspaper cut-out of me somewhere saying “I want to be an Egyptologist” when I was about 12. 1986 I think it was. There are actually a lot of Czech Egyptologists. It’s a specialty here, it’s always been a dream to go there but it would be really hard now.

When did you get into drawing?

And what would you draw?

Well, I would obsess and draw one thing over and over again. I had a mermaid obsession, and the Egyptology was a part of a lot of the stuff that I would draw too – I think that had a big impact on my drawing because it was so graphic and standardized. You know, a hand always looks exactly the same, so does a foot. So I’d really try and nail it. But then I got into music, which became a huge diversion in my life. So then I would draw pictures of Beethoven over and over and over.

That’s really nice. To be so young and drawing Beethoven? That’s quite unheard of.

When I was 12 I broke my arm doing gymnastics in rubber boots on the grass… the wet grass (laughs). And it hurt so badly – it was coming out at a 90 degree angle.

Yes. Anyhow, I was in the cast for about a year and when I got it off I met a girl who played the piano and she was really good and she taught me some Beethoven, so then I became obsessed. So my parents got me a used piano and a teacher. And as an obsessive gay boy with no friends, I would go home and practice and practice and all of a sudden I went from a total beginner to quite advanced in just a few years.

Then I went to university and studied music. Everything was music. But the whole time I was drawing and drawing and drawing. You know, we have sort of a romantic idea of artists – that they should suffer and it should be really hard, and practice 7 hours a day. A lot of people, including me, find that very attractive.

So I was a good artist, but because it came easily to me and there was no romantic suffering involved, I didn’t feel like it was a very special skill. The whole time my Mum was saying, “Why don’t you go to art school?” and I thought, “Please, I’m a pianist” (laughs). So then in my third year of studies I realized that I wasn’t mean to be a pianist, but an artist.

To read the full interview with Kurt and find out more about his film work, click here.