Khufu's 2nd boat to be reassembled

The Pharaoh Khufu's second boat is to regain its original look after more than 4,500 years buried beneath the sands, writes Nevine El-Aref 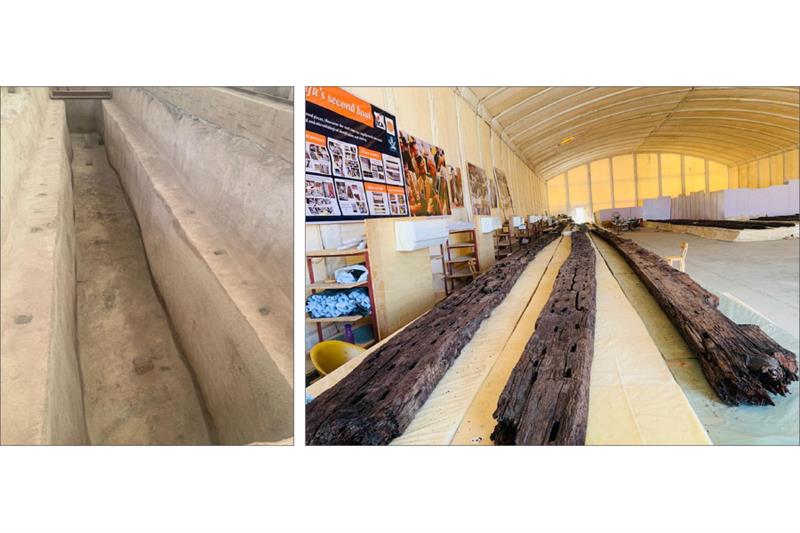 After its discovery along with the first in 1954 by late Egyptian architect and archaeologist Kamal Al-Malak and fellow archaeologist Zaki Nour during routine cleaning on the southern side of the Great Pyramid of Khufu on the Pyramids Plateau, Kuufu's second boat remained sealed within its pit until 1987 when the US National Geographic Society examined it in association with the Egyptian Office for Historical Monuments.

The team penetrated the limestone ceiling of the pit and inserted a tiny camera within to ascertain the boat's status, then sealing the pit again. Unfortunately, the hole that was made then leaked air into the pit, allowing insects to thrive and damage to take place to some parts of the boat's wooden beams.

In collaboration with the Japanese government, a Japanese scientific and archaeological team from Waseda University then offered a grant of $10 million to lift the boat out of the pit, restore, and reassemble it.

A joint Egyptian-Japanese team started the work and completed the first phase when a collection of 1,698 wooden beams was lifted out from 13 layers found inside the pit. First-aid restoration was carried out on them, and they were transferred together with other parts of the boat to the conservation centre of the Grand Egyptian Museum (GEM) for restoration.

"To enhance the visitor experience at the GEM after its opening, the reassembling of the boat will be carried out by the Japanese-Egyptian restorers live at its display location at the museum," Al-Tayeb Abbas, assistant to the minister of tourism and antiquities for GEM archaeological affairs, told Al-Ahram Weekly, adding that the work would take almost four years of hard and accurate restoration.

"It is exceptional and challenging work," said Atef Moftah, GEM supervisor-general, during the launch ceremony held late last week at the museum.

Egyptologist Zahi Hawass, a former minister of antiquities, expressed his enthusiasm and pride in the project, saying that it was started as early as 1992 and highlighting the work carried out to lift the boat's cedar beams out of the pit and restore it and transfer it to the GEM to be put on display beside its sister, the first boat, which was transferred to the GEM in 2021. 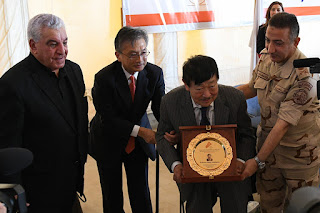 Sakuji Yoshimura, head of Higashi University in Japan, said that the Egyptian-Japanese team was working hard on the project, considering it to be a special gift to humanity.

Eissa Zidan, director of the restoration and transfer of antiquities at the GEM, said that the first phase of the project started in 2008, when the Egyptian-Japanese archaeological team assessed the area surrounding the Second Boat pit with the use of topographical radar surveys.

A large hangar was built over the pit, with a smaller hangar erected inside to cover the top of the boat itself. The hangars were especially designed to protect the wooden remains during the project's analysis and treatment phases. A laser-scanning survey also documented the area, particularly the wall between the Great Pyramid and the pit.

Zidan said that a collection of 41 stone blocks that had covered the pit containing Khufu's second boat for the last 4,500 years was also removed. The team lifted out 1,698 wooden beams from the 13 layers inside the pit. All were restored in situ and documented and damaged ones were consolidated and given first-aid treatment, he said.

The assembly will be featured on the tour of the GEM, allowing visitors to admire the boat and watch the restoration work carried out live before them.

Khufu's boats are the largest ancient royal vessels ever found in Egypt and among the oldest planked vessels in the world. They were built for king Khufu, the second Pharaoh of the Fourth Dynasty of ancient Egypt's Old Kingdom.

The First Boat was uncovered inside a pit found under a roof of 41 limestone slabs. Removing one of these slabs, a cedar boat, completely dismantled but arranged in the semblance of its finished form, was found along with layers of mats, ropes, instruments made of flint, and some small pieces of white plaster with 12 oars, 58 poles, three cylindrical columns and five doors.

The boat was removed to a nearby warehouse where master restorer Ahmed Youssef spent more than 20 years reassembling it. It was then put on display at a museum bearing its name on the Giza Plateau near to the Great Pyramid. It has since been removed to its new permanent location at the GEM.

To begin his work, Youssef had to conduct a meticulous study, looking at drawings sculpted on ancient Egyptian walls and tombs as well as at the construction techniques of modern boats used at the time. Based on his research, he took almost 14 years to solve the puzzle, and piece by piece he succeeded in reconstructing the boat.

The discovery of the boat created debate among scholars, as some Egyptologists see it as a Solar Barque, a boat to carry the dead king of Egypt, resurrected and floating with the deity of the Sun god Re, on his eternal journey across the sky.

Others propose that it was a pilgrimage boat used by Khufu during his lifetime. Archaeologists who investigated the remains found evidence of rope markings clearly showing that the boat had been used on water.

*A version of this article appears in print in the 8 September, 2022 edition of Al-Ahram Weekly.