Egypt has recovered on Sunday two ancient Egyptian statues that were smuggled to Belgium, as the country continues intensive efforts to retrieve thousands of artefacts found in the unlawful possession of museums and individuals around the world. 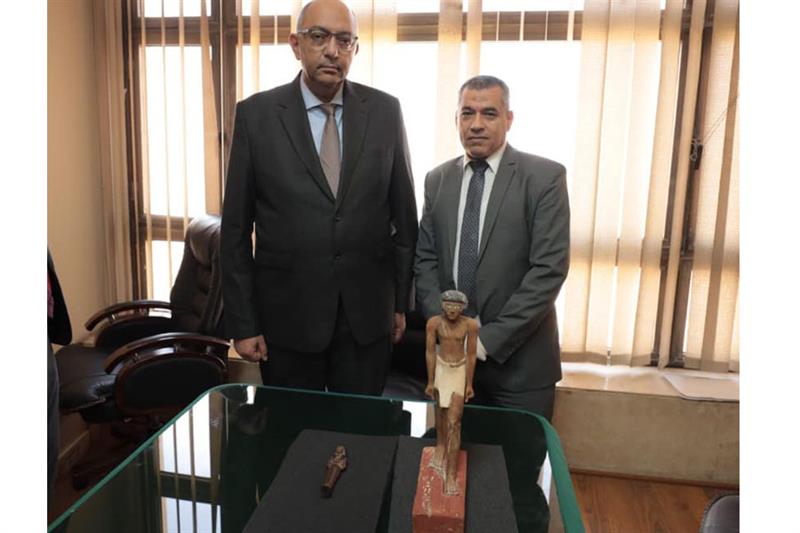 The two pieces are a wooden, painted figurine statue of a standing man resting on a pedestal and awooden ushabti figurine.

In 2016, the two pieces were seized by the Belgian authorities at an exhibition for selling antiquities afterinvestigations concluded the exhibition owner did not possess their ownership documents, the statement added.

The two pieces were handed over by Assistant Foreign Minister for Cultural Relations Omar Selim to the Repatriation Antiquities Department (RAD) at the Ministry of Tourism and Antiquities in the presence of General Supervisor of the RAD Shaaban Abdel-Gawad and a representative of the Ministry of Interior.

Egypt is set to repatriate 16 artefacts that were stolen and smuggled out of the country after they were recovered by the authorities in the United States as part of their investigations in a major case of international trafficking in Egyptian antiquities.

In June, New York prosecutors announced seizing five Egyptian artefacts worth more than $3 million from the Metropolitan Museum of Art as part of an investigation into international trafficking in Egyptian antiquities involving Jean-Luc Martinez, the former president of the Louvre, who was charged in May with complicity in fraud.

In recent years, Egypt toughened penalties for unlawful possession or smuggling of artefacts.

Last year, parliament amended the law on protecting antiquities to stipulate that those illegally possessing or selling antiquities face imprisonment and a fine of EGP 1 million to EGP 10 million.

Egypt has succeeded in recovering 5,000 artefacts from the US, 115 from France, and 36 from Spain in recent years.