The Colombian who will seek to solve a historical enigma of Egypt – Explica .co

His CV was one of 12 selected from the 5,000 applications received by the Institute for Ancient Egyptian Studies in Madrid.

"I am very grateful that the call was open to everyone and that made it possible for it to reach Latin America as well," he tells Elizabeth Noreña from her home in Medellín, Colombia, to BBC Mundo.

This Colombian Egyptologist graduated from the Universidad Pontificia Bolivariana will be part of a team made up of archaeologists, anthropologists, historians and art restorers.

They will travel to Luxor, in southern Egypt, to try to solve one of the ancient riddles that science has not yet been able to answer.

Almost 3,500 years ago, Pharaoh Akhenaten decided to eliminate all the gods of Ancient Egypt and declare the Sun as the sole deity.

With this decision he challenged the rules and the culture that had remained unchanged for 1,500 years. Some historians nicknamed him "The heretic pharaoh."

It was a huge change. But did it really start with Akhenaten?

There is knowledge gap and documentation of what happened in one of the most turbulent and splendid times of Egyptian civilization.

But the story of the vizier Amenhotep-Huy, the right hand of Pharaoh Amenhotep III – Akhenaten's father – can shed light on all this.

In this interview with BBC Mundo, the Egyptologist tells us what does the team expect to find in the tomb of a vizier. 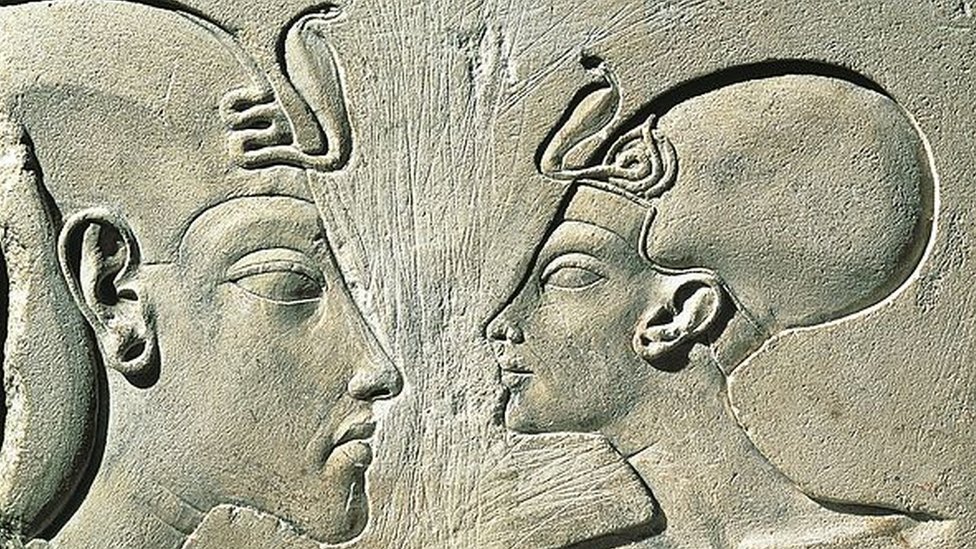 How many mysteries of ancient Egypt remain to be solved?

It is a number that no Egyptologist, anthropologist or archaeologist could give you.

In the land of the pharaohs, ancient Egypt or Kemet, as they called it, their black land, more and more things continue to be found.

Just look at finds in Sakkara from last year, ending 2020, when Egyptian archaeologists stumbled upon 50 New Kingdom sarcophagi that are at least 3,000 years old.

Or the discovery several weeks ago of the "Lost Golden City" in Luxor. A city hidden under the sand that is in good condition and found by the team of archaeologist Zahi Hawas.

Every two or three months there is new news. The Egyptian civilization has 3,500 years of history. It was a powerful empire so I think we still have many things to discover.

Saying an exact number would be a very pretentious thing to do. It is impossible to know. 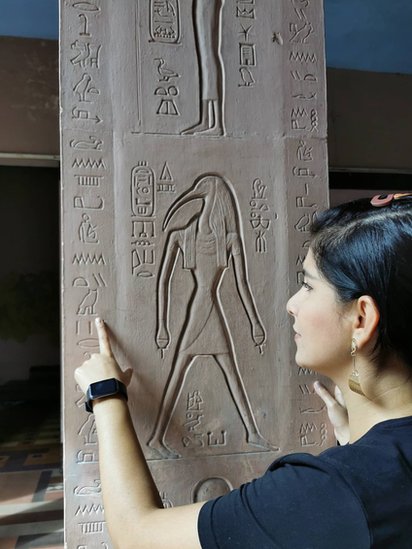 Elizabeth Noreña, Master in Egyptology, was a teacher at the UPB College and the Faculty of Education for 14 years. (Photo: Maui García)

Which of these mysteries is your expedition going to focus on?

The excavation will take place in the tomb of the vizier Amenhotep-Huy.

The figure of the vizier in Ancient Egypt is equivalent to what today would be a prime minister. He was the right hand of the head of state, who at that time was Amenhotep III, Akhenaten's father.

The mission will be led by Teresa Bedman and Francisco Martín Valentín, from Institute of Ancient Egyptian Studies of Madrid.

I am very grateful that the call was opened worldwide.That meant that it could also reach Latin America.

I know that about 5,000 people submitted our candidacy and that only 12 people were selected. And as a Colombian, as a Latin American, knowing that I can be part of such a prepared, professional team is an honor. 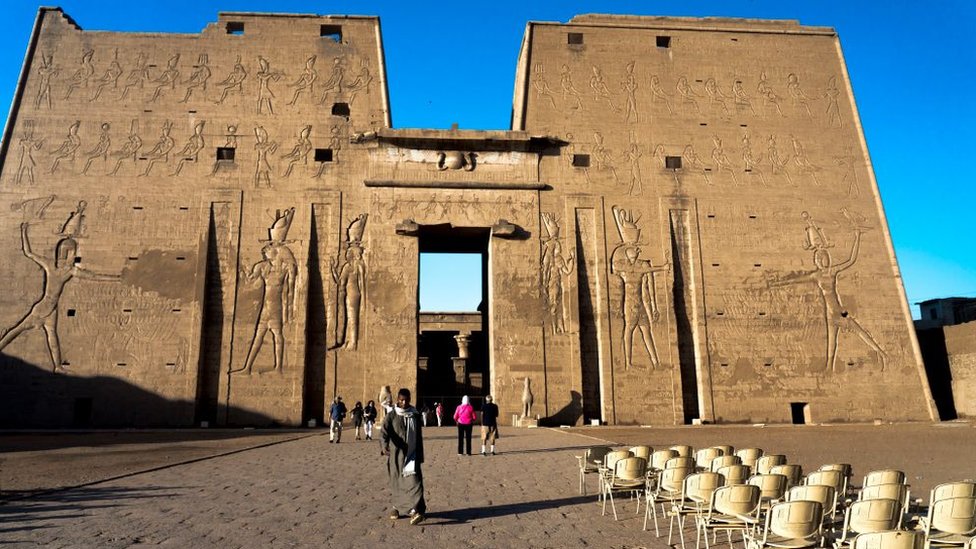 Luxor, near the Valley of the Kings, is located about 500 km south of the Egyptian capital, Cairo. (Photo: Getty Images)

The tomb is located on the west side of Luxor.

Because it is important?

The period of five to six years during which King Amenhotep IV, also known as Akhenaten, had his residence in Thebes, before moving to Amarna, is today in the most complete darkness for the world of Egyptology.

What we know of the ancient world as Thebes would be Luxor today. That is why we are going there.

Akhenaten, known as the "rebellious pharaoh," changed everything when he came to power. All the traditional cult that existed in Egypt, the gods, the polytheistic cult, changed it to a single divinity, to the cult of the god Aten, the sun god.

The team will also try to reveal if this religious change that we say in history has been concentrated in Akhenaten, it could have started earlier, with his father. 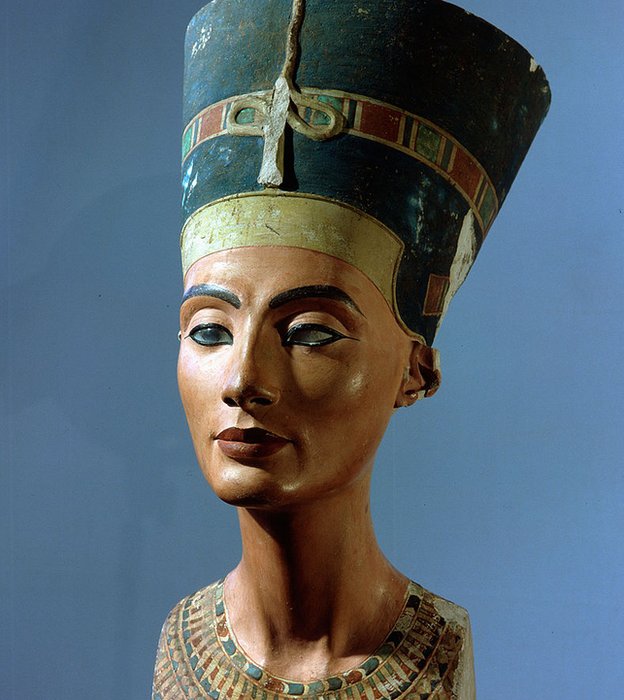 Nefertiti was Akhenaten's wife. Her beauty is legendary, but so are her skills as a ruler. (Photo: Getty Images)

What will your role be on the team?

Each person has a particular role within the team.

Archaeologists are the first to give directions to begin the excavation, art restorers are in charge of repairing the pieces found and Egyptologists, like me, are in charge of investigating, analyzing and locating in history everything that is discovered .

The pieces discovered in this excavation will be exhibited in the new Great Egyptian Museum in Cairo, butwill have time to study the pieces and reveal what happened in that period of history?

We learned from the mission directors that some of the pieces will go to the great museum, but not all of them will be exhibited in museums and this is important to clarify.

The Ministry of Antiquities and the Police in Egypt are very strict in (what has to do with) all the permits.

The mission team will work and live together.

During the project, we can only go with the team and with the directors on the outings that are scheduled.

You cannot go out as an individual tourist. There are strict security protocols. 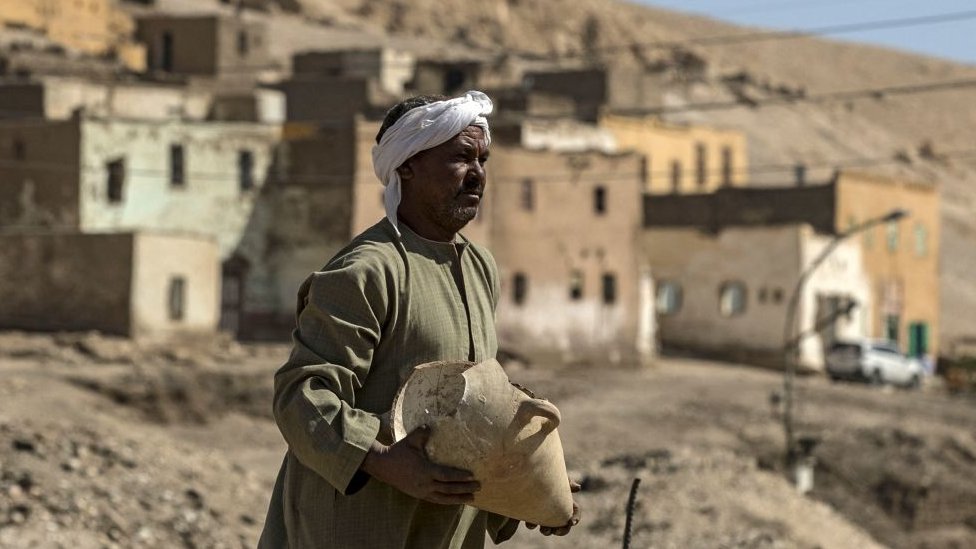 New pieces are being discovered every month at the excavations at Luxor. (Photo: Getty Images)

Has the pandemic stopped the trafficking and smuggling of antiquities?

The pandemic may have slowed it down, but it also brought an economic imbalance globally.

And we can think that in some areas there will have been less and in others on the contrary, that they have taken advantage of the conjunctural moment to do this great damage. Because depriving humanity of that legacy is a great harm. 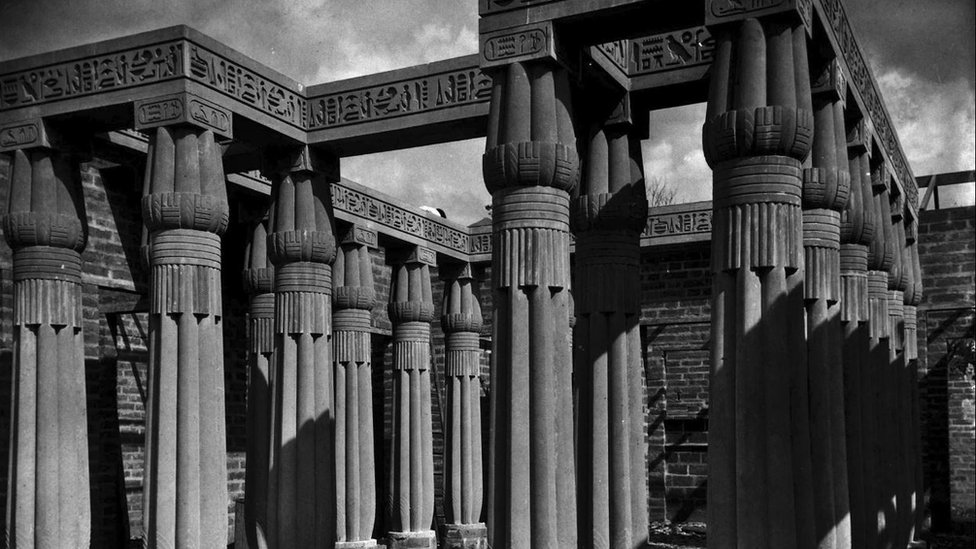 The Egyptian Palace of Medellín was built in 1928. (Photo: Historic Center of Medellín)

How is it that in Medellín there is the only Egyptian Palace in all of Latin America?

Well, for Antioqueños it is a very important monument. And these days, with the recent discoveries we have detected an increase in interest in knowing this place in Medellín, which is close to turning 100 years old.

It was Mr. Fernando Estrada, who was a visionary for his time, who had the palace built at the end of the 1920s. It dates from 1928.

Estrada studied astronomy at the Sorbonne University in Paris, and was passionate about Egypt for its mythology, for its gods, for the history of its monarchs, of the pharaohs. 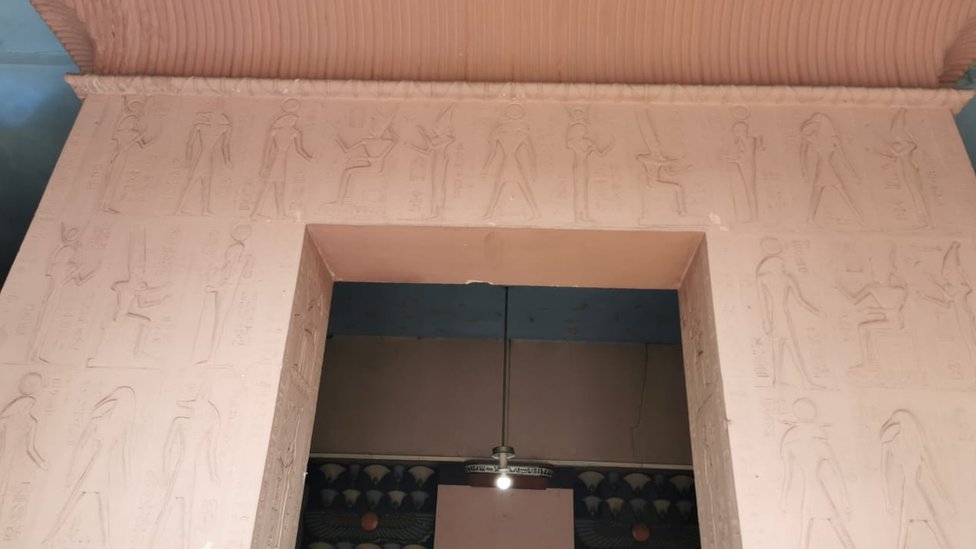 And you decide to make a replica?

Hire people specializing in Egyptian art, architects and even foreigners who made the structure of the palace.

Imagine the novelty back then.

The central courtyard resembles the temple of Luxor and the portico is the representation of the entrance of a temple that is dedicated to the goddess Hathor, the daughter of the sun god. It is really beautiful.

Unfortunately, when Fernando Estrada passed away, his family did not keep the palace and it began to pass through different hands.

For some time it was even abandoned, until in 2016 the process of recovering the space of the cities began.

The mayor's office and other private sector organizations took steps to restore the place, which now hosts series of conferences and other cultural activities such as the International Arab Festival. 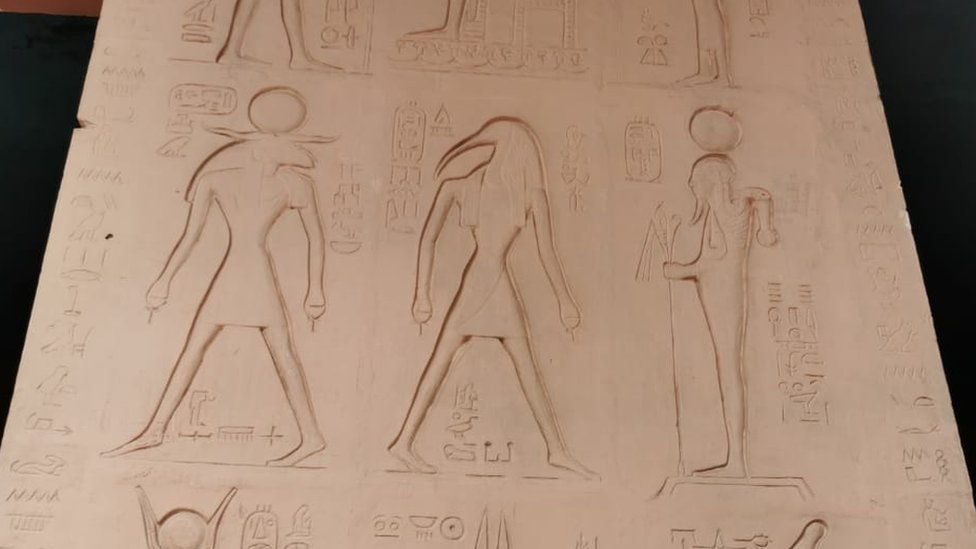 The walls of the Egyptian Palace in Medellín are full of hieroglyphs. (Photo: Elizabeth Noreña)

Your blog, launched during confinement, has increased interest in Ancient Egypt. What part of history are people most interested in?

In my online courses I am fortunate that I have students not only from Colombia, but from Uruguay, Argentina, Mexico, Spain and I have had students from Australia, Latinos who are there.

The confinements caused a leap in educational practices.

Virtual education has always existed, but this is when we have seen it most advance towards that virtual world of learning.
Posted by Glenn Meyer at 10:19 PM