Glass: Lapis Lazuli from the Kiln

Today glass is all around us, it is familiar to us all in windows, vessels, spectacles, a myriad of uses. However, when glass was first made in the Late Bronze Age (LBA) around 1500 BCE it was very different.

Firstly, it was almost always highly colored, indeed its color was one of the things it was prized for. Secondly, it was often opaque, with compounds specifically added to it to make so. Thirdly, glass was highly prized and valuable, not a utilitarian material at all, more like a precious stone such as lapis lazuli or turquoise which, with its strong color and opacity, it was deliberately made to closely resemble. Indeed, in Akkadian, glass was aban kûri, "stone from the kiln", emphasising these links. Glass also had magical powers, being capable of healing and warding off the evil eye, amongst other abilities. Thus, we need to adjust our mindset when thinking about glass, how it was used and what it meant to LBA people.

In contrast, in terms of composition, modern glass is very similar to this early glass. Both are made predominantly of silica derived from a clean quartz sand or quartzite pebbles. However, you cannot easily make glass from just quartz, because quartz melts at a very high temperature, in the region of 1700°C. While this is possible in some modern, advanced furnaces, it was impossible for the ancient glassmakers – an ancient furnace would itself melt and collapse long before it got even close to this temperature. Therefore, another compound, known as a flux, had to be added to the quartz to lower its melting temperature. Modern glasses also use fluxes, most commonly soda derived from artificially produced sodium carbonate. In LBA glasses, soda is also the flux, but it is derived from the ash of plants that are salt tolerant, living on the edges of deserts and coasts. Mixing some of this ash with the crushed sand or pebbles reduces the temperature necessary to melt it and create a glass to a more reasonable 1100°C – high, but possible. 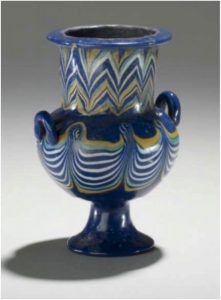 To this melt, colorants derived from compounds containing elements such as cobalt and copper (for blues), antimony and lead (for white and yellow) and manganese (purple and black) are added. This brightly colored glass is worked into beads, amulets, inlays, other decorative elements and, perhaps most striking of all, vessels. Modern glass vessels are usually blown, but glass blowing was only discovered around the first century CE. 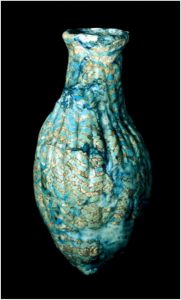 Before this time, vessels were "core-formed". This is a rather laborious technique where a core of dung and clay is dipped into molten glass to completely cover it, and then decorated by trailing rods of contrasting colors across the body and adding handles, rims and feet, if desired (see the Corning Museum of Glass website for some excellent videos showing this technique being performed). On cooling, the core has to be carefully chipped out to create the vessel. These vessels are strikingly colored when well preserved, with an aesthetic that is still appealing now.

Where glass was first made is not clear – it appears in the archaeological record in quantity in both Egypt and the Near East simultaneously, as far as we can tell. Identified glassmaking sites of this period are very rare, indeed none have been conclusively identified in the Near East at all, although limited finds indicating glassworking are present. There are three that are reasonably well known in Egypt, the earliest of which is probably connected with the Palace of Amenhotep III (1338-1351 BCE) at Malkata, near Thebes, now Luxor.

One of the reasons for glass workshops being difficult to find and identify is that LBA glass is susceptible to weathering if left in contact with water or in otherwise damp conditions. Egypt is lucky in that much of the glass found there is recovered from very dry tombs dug into the edge of the Western Desert, almost perfect conditions for the preservation of the glass. Mesopotamia is not so fortunate, and the fertile, damp flood plains mean that the preservation of glass is, at best, patchy. Often the glass is weathered, which starts with an iridescent effect on the surface of the vessel, but often spreads through the entire object, turning it into a white and friable powder, which easily disintegrates on touch. This certainly means that we have lost a lot of the glass that was originally present in this area, and probably production sites as well.

Weathering patterns on vitreous materials. Here spacer beads from the City of Nuzi are weathered by water to make them white and very delicate. They would almost certainly all have been a brilliant blue colour. From Harvard Museum of the Ancient Near East.

It is clear that the Near East did produce glass locally, and the evidence for this is derived from the analysis of the glass found in the Near East and in Egypt. Several techniques have been used in the past, but perhaps the best technique being used now is Laser Ablation Inductively Coupled Mass Spectrometry. LA-ICPMS uses a high-power laser to remove a very small sample from the glass object (typically only 0.1mm across, invisible to the naked eye). This sample is ionised in a plasma torch and then the ions of each of the elements it contains are counted by the mass spectrometer. The technique has the advantages of being able to analyse almost all the elements that are found in glass, plus it has very low detection limits – for many elements it can quantify down to one part in a billion – outstanding performance and very useful.

Glass from several sites in Egypt and the Near East has been analysed, including Amarna, Malkata, Nuzi and Tell Brak. What was revealed from the analysis was that, while the glasses found at all of these sites are very similar in their major and minor components, at trace levels, only really analysable by LA-ICPMS, there are some subtle but consistent differences. These differences are probably caused by using slightly different raw materials and/or a slightly different manufacturing techniques or tools. Analysis showed that almost all the glass from Egypt had one elemental "fingerprint", whereas all the glass from the Near East had another. It is therefore highly likely that there is production in both areas by one or more workshops. Using this technique, glass in the Levant, Greece and on the Ulu Burun shipwreck has been analysed, and shown to be either from Egypt, the Near East or both. LBA glass was therefore an important part of an exchange network, moving between the states, courts and kings.

There is textual and iconographic evidence that supports this exchange of glass. Glass is requested by the Egyptian king in the "Amarna letters", a diplomatic archive found in the eponymous city and dating mostly to the reign of Amenhotep III and his son, Akhenaten. There are tomb scenes where glass is being given to the Egyptian King and a striking relief in the Temple of Karnak where the Egyptian king offers baskets of glass to the Temple in thanks for his military victories in the Levant. This all emphasises the value of glass and its place in a complex world of competing states and kings. It is perhaps not really surprising therefore, that the study of ancient glass is one of the liveliest and most productive of all archaeomaterials subjects and more and more is learned yearly from modern analysis of both old collections and new excavations.

Andrew Shortland is Professor of Archaeological Science and Director of Cranfield Forensic Institute at the Cranfield University.