A collection of rock-cut tombs was uncovered in the Al-Hamidiyah necropolis that is east of Sohag earlier today.

These tombs were uncovered accidentally during the archaeological survey carried out at the necropolis to document its rock-cut tombs.

Mostafa Waziri, secretary-general of the Supreme Council of Antiquities, said that the tombs have different architectural styles and are dug at several levels in the mountain. They include tombs with one or several burial shafts and some have slope corridors that end with burial shafts. These tombs extend to periods of time ranging from the end of the Old Kingdom to the end of the Ptolemaic period. He pointed out that among the discovered tombs is a sloping tomb dating back to the end of the Old Kingdom that consists of a false door and an entrance leading to a gallery with a burial shaft in the southeast, which was reused in later ages.

The false door is inscribed with the remains of hieroglyphic text and scenes depicting the owner of the tomb performing sacrifices and people making offerings to the deceased. Mohamed Abdel-Badiaa, head of the Central Department of Upper Egypt Antiquities, said that the excavation work in the necropolis also resulted in the discovery of many pottery vessels, some of which were used within daily life and others for funerary purposes as miniature symbolic deposits which are known as "votive miniatures".

Small size spherical vessels with traces of yellowish paint on the outside were found, along with several small-sized alabaster and pottery vessels, remains of a round metal mirror, human and animal bones, and many pottery fragments that represent amphorae dating back to the Late Period. Remains of limestone bearing inscriptions that may represent funerary plates of tomb owners dating back to the end of the Sixth Dynasty were also found. Within the framework of the project, more than 300 cemeteries in the area were documented. It stretches from Nag Al-Sheikhs in the south to Al-Kharandariyah in the north.

This group of tombs represents the rulers and employees of the ninth region of Upper Egypt, which is considered one of the important administrative centres of ancient Egypt, due to the location of the Mediterranean between the exiled capital and Aswan, as well as the vicinity of the city of Abydos, which is the centre of the worship of the god 'Osir'. 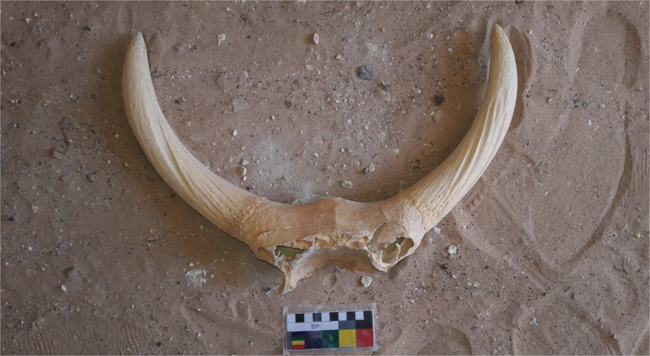