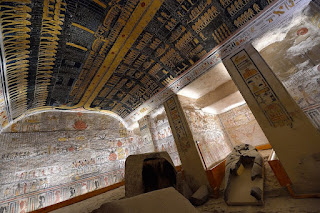 The tomb of Pharaoh Ramesses VI in the Valley of the Kings has been digitally scanned to create a virtual interactive high-resolution environment.

Ramesses VI Nebmaatre-Meryamun was the fifth ruler of the Twentieth Dynasty of Egypt during the late 12th century BC. During his reign, the economy had taken a decline, with Ramesses VI turning to usurping the statues and monuments of his forebears, plastering and carving his cartouches over theirs.

With his death, his body was buried in a tomb in the Valley of the Kings – designated today as KV9. KV9 was originally constructed for use by Pharaoh Ramesses V, but Ramesses VI commanded that KV9 be entirely refurbished for himself.

The tomb's layout is typical of the 20th Dynasty during the Ramesside period, and consists of a long corridor, flanked with images of Ramesses VI before Ra-Harakhti and Osiris, leading to a hall decorated with an astronomical ceiling.

The interactive environment was commissioned by the Egyptian Ministry of Tourism and Antiquities, and created by VRTEEK, a specialist in 3D reality scanning and VR/AR games.