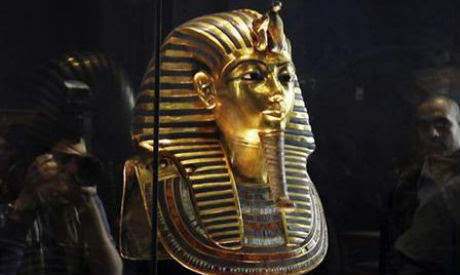 Several artifacts of the Tutanakhamun collection have been transferred from Upper Egypt's Luxor to the Grand Egyptian Museum (GEM), set to be inaugurated this year in Giza.

The mask is also among those pieces that are to be moved to the new museum, that is one of the largest worldwide, shortly before it is opened.

Director General of the Egyptian Museum in Cairo's Al-Tahrir square Sabah Abdel-Razek affirmed that the showcase of the young king's mask has never been opened since it underwent restoration in 2015.

Abdel-Razek said the ministry has denied a large number of requests from professional photographers and foreign media to take photos of the mask outside of the showcase in exchange for large sums of money.

She affirmed that this kind of request is rejected in order to keep such unique and prominent pieces preserved.

The 3,300-year-old burial pharaonic mask was discovered in Tutankhamun's tomb along with other artifacts by British archaeologists in 1922, sparking worldwide interest in archaeology and ancient Egypt.

It was restored after the beard of the mask became detached during work on the relic's lighting in August 2014 and then was hastily re-attached with epoxy.