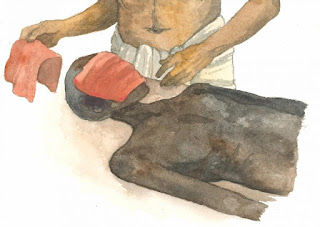 Based on a manual recently discovered in a 3,500-year-old medical papyrus, University of Copenhagen Egyptologist Sofie Schiødt has been able to help reconstruct the embalming process used to prepare ancient Egyptians for the afterlife. It is the oldest surviving manual on mummification yet discovered.

In ancient Egypt, embalming was considered a sacred art, and knowledge of the process was the preserve of very few individuals. Most secrets of the art were probably passed on orally from one embalmer to the other, Egyptologists believe, so written evidence is scarce; until recently, only two texts on mummification had been identified.

Egyptologists were therefore surprised to find a short manual on embalming in a medical text that is primarily concerned with herbal medicine and swellings of the skin. The manual has recently been edited by University of Copenhagen Egyptologist Sofie Schiødt:

– Many descriptions of embalming techniques that we find in this papyrus have been left out of the two later manuals, and the descriptions are extremely detailed. The text reads like a memory aid, so the intended readers must have been specialists who needed to be reminded of these details, such as unguent recipes and uses of various types of bandages. Some of the simpler processes, e.g. the drying of the body with natron, have been omitted from the text, Sofie Schiødt explains. She adds:

– One of the exciting new pieces of information the text provides us with concerns the procedure for embalming the dead person's face. We get a list of ingredients for a remedy consisting largely of plant-based aromatic substances and binders that are cooked into a liquid, with which the embalmers coat a piece of red linen. The red linen is then applied to the dead person's face in order to encase it in a protective cocoon of fragrant and anti-bacterial matter. This process was repeated at four-day intervals.

Although this procedure has not been identified before, Egyptologists have previously examined several mummies from the same period as this manual whose faces were covered in cloth and resin. According to Sofie Schiødt, this would fit well with the red linen procedure described in this manuscript.

Four was the key number

The importance of the Papyrus Louvre-Carlsberg manual in reconstructing the embalming process lies in its specification of the process being divided into intervals of four, with the embalmers actively working on the mummy every four days.

– A ritual procession of the mummy marked these days, celebrating the progress of restoring the deceased's corporeal integrity, amounting to 17 processions over the course of the embalming period. In between the four-day intervals, the body was covered with cloth and overlaid with straw infused with aromatics to keep away insects and scavengers, Sofie Schiødt says.

The manuscript, which Sofie Schiødt has been working on for her PhD thesis, is the Papyrus Louvre-Carlsberg – so called because one half of the papyrus belongs to the Louvre Museum in Paris and the other half is part of the University of Copenhagen's Papyrus Carlsberg Collection. The two parts of the papyrus originally belonged to two private collectors, and several sections of it are still missing. Based on the palaeography, that is, the sign forms, the six metre long papyrus is dated to approximately 1450 BC, which means that it predates the only two other examples of embalming texts by more than a thousand years.

The bulk of the papyrus, which is the second-longest medical papyrus surviving from ancient Egypt, deals with herbal medicine and skin illnesses. Specifically, it contains the earliest-known herbal treatise, which provides descriptions of the appearance, habitat, uses, and religious significance of a divine plant and its seed as well as a lengthy treatise on swellings of the skin, which are seen as illnesses sent forth by the lunar god Khonsu.

The embalming, which was performed in a purpose-built workshop erected near the grave, took place over 70 days that were divided into two main periods – a 35-day drying period and a 35-day wrapping period.

During the drying period, the body was treated with dry natron both inside and outside. The natron treatment began on the fourth day of embalming after the purification of the body, the removal of the organs and the brain, and the collapsing of the eyes.

The second 35-day period was dedicated to the encasing of the deceased in bandages and aromatic substances. The embalming of the face described in the Papyrus Louvre-Carlsberg belonged to this period.

The entire 70-day embalming process was divided into intervals of 4 days, with the mummy being finished on day 68 and then placed in the coffin, after which the final days were spent on ritual activities allowing the deceased to live on in the afterlife.

UNIVERSITY OF COPENHAGEN – FACULTY OF HUMANITIES