What Actually Happened in Syria at the end of the Late Bronze Age? 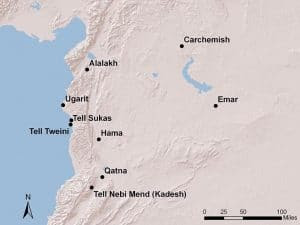 The year, approximately 1200 BCE. The place, the geographic area of modern-day Syria. War has broken out as marauding pirates and nomads ravage the great cites of Ugarit, Emar, and Carchemish, looting and burning everything in their way. These groups became known in the Egyptian records as the infamous Sea Peoples.

Famine plagued the region as climate change slowly deteriorated the ability to grow crops, and the final nail in the coffin were earthquakes, which destroyed anything left untouched by the ruinous hordes. Once all these calamities passed, the Late Bronze Age came to its end, and the region entered a Dark Age for the next 200 years.

Or at least that's how the Hollywood blockbuster version of events would go. But reality is far more complicated than modern scriptwriters – and many archaeologists -would lead us to believe.

What about the supposed "wave of destruction?" The Sea Peoples are alleged to have destroyed many sites in Syria including Ugarit, Tell Sukas, Tell Tweini, Carchemish, Kadesh, Qatna, Hama, Alalakh, and Emar. The trouble is that only two of these were actually destroyed around 1200 BCE.

Both Qatna and Hama were destroyed in the mid-14th century BCE, well before the end of the Late Bronze Age, and neither show any evidence of destruction around 1200 BCE. For Alalakh, a reanalysis showed that the supposed 1200 BCE destruction by the Sea Peoples occurred a century earlier, around 1300 BCE.

Excavators also presumed that the Sea Peoples had destroyed Tell Sukas and Tell Tweini. But a closer examination of the archeological record reveals that neither site was actually destroyed. At Tell Sukas, the Late Bronze Age buildings show no signs of burning or collapse; only some patches of floor had been burned, hardly evidence of a tremendous destruction event. At Tell Tweini, what had been assumed to be evidence of a massive destruction event turned out to be debris from rebuilding activity that took place hundreds of years after 1200 BCE.

The same pattern is found elsewhere, sites are listed as destroyed but no evidence of destruction has been uncovered. At Tell Nebi Mend, ancient Kadesh, excavations demonstrated that the site continued to be inhabited from the Late Bronze to the Iron Age without interruption. The same is true for Carchemish. There was a smooth transition from the Late Bronze to the Iron Age. This is despite the fact that Carchemish is listed as destroyed in the Egyptian records chronicling the march of the Sea Peoples.

Not all sites were spared. Emar was destroyed and abandoned sometime around 1187–1175 BCE but only the monumental and religious structures were burned, while domestic buildings were left untouched. Most of Ugarit, a major port, was burned except for one residential neighborhood. In the streets, houses, and open spaces of this residential district, excavators uncovered 32 arrowheads and 12 other weapons of war. After the city had been burned, Ugarit was abandoned.

Plan of where weapons were found in the residential neighborhood of Ugarit. The houses have been lettered while streets and open spaces have been left blank. O. Callot, La tranchée "Ville Sud," Études d 'architecture domestique, Ras Shamra–Ougarit X, (Paris, 2013): Fig. 309.

So who or what destroyed Ugarit and Emar? For one thing, it was not an earthquake. The weaponry in the streets of Ugarit testifies to a battle in the city before it was burned, and evidence of earthquake damage is lacking. Similarly, at Emar, there is no evidence pointing to an earthquake; only monumental or religious structures were targeted and burned by an unknown assailant.

The Sea Peoples are the alleged perpetrators behind Ugarit's destruction. One reason is Pharaoh Ramesses III's claims that the Sea Peoples were 'agents of destruction' as they made their way toward Egypt on land and by sea. The other is that several texts uncovered in the ruins of Ugarit mention "enemies on boats" which led many scholars to believe that this was evidence of the Sea Peoples raiding before they destroyed the city. But modern scholars have indicted the Sea Peoples for a crime that no one in ancient times ever accused them of committing. 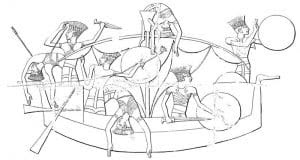 Detail from Medinet Habu of one of the ships of the Sea Peoples. S. Wachsmann, The Gurob ship-cart model and its Mediterranean context, (College Station, 2013), Fig. 2.5.

The claim that the Sea Peoples destroyed Ugarit unravels when we look at what Ramesses actually said. While he lists several places as having been "cut off" by the Sea Peoples, he never mentions Ugarit. Ramesses mentions Carchemish, which led some scholars to assume he meant all of Hittite Syria including Ugarit. The problem with this is that in Egyptian texts, Ugarit and Carchemish are listed separately and there is no reason to assume that Ramesses meant Ugarit when he said Carchemish.

There are also problems using the Ugaritic texts that mention "enemies on boats" as evidence that the Sea Peoples destroyed the city. Other texts found at Ugarit show they knew the names of several Sea Peoples groups, but the mysterious "enemies on boats" are never named. So, the victims of the crime knew the accused, but failed to identify them by name. The lead witness Ramesses III never even mentioned them as having been at the scene of the crime, and while we cannot say who actually destroyed Ugarit it seems it was not the Sea Peoples.

So, was the end of the Late Bronze Age really as bad as it has been made out? Yes and no. Some sites were burned but others were not. There was climate change, but it was not apocalyptic; rather, there was 150 years of gradual cooling and drying that did not affect all regions equally. The destruction and abandonment of Ugarit and Emar were tragic for their inhabitants, but for Carchemish this period of instability proved to be a boon. Because the Great King of the Hittite Empire disappeared without an historical trace, Kuzi-Tešub, the king of Carchemish, was able to take up the title of Great King for himself and established a Neo-Hittite kingdom.

What was bad for some, was good for others. There is still much to discover about the end of the Late Bronze Age in Syria, but it does not appear to have gone out with a cataclysmic, Sea Peoples destroying, climate driven, earth-shaking bang.

Jesse Millek is a Visiting Scholar in the Department of Middle East Studies at the University of Michigan and a Research Fellow at the German Research Foundation.

2018 Millek, J. M. "Destruction and the Fall of Egyptian Hegemony over the Southern Levant," Journal of Ancient Egyptian Interconnections 19, 1-21.