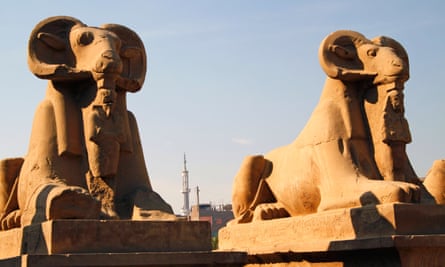 Two of the ram-headed sphinxes at the entrance of the Temple of Karnak in Luxor. Photograph: F1online digitale Bildagentur GmbH/Alamy Stock Photo
Ruth Michaelson
Published on Thu 7 May 2020 10.35 EDT

The transfer of four sandstone sphinxes to Tahrir Square in Cairo will expose them to intense heat and air pollution and amounts to an attempt to erase Egypt's recent history, Egyptologists and academics have said.

Officials from Egypt's antiquities ministry recently announced that the ram-headed sphinxes had been taken from the Karnak temple in Luxor to the capital's busy traffic roundabout, where they have joined a pink granite obelisk. The sphinxes are being stored in wooden crates until an unveiling ceremony, for which a date has not been set.

"When we go to European capitals, like Rome or Paris or London, and also Washington, we see that they use Egyptian obelisks in decorating their major tourist squares, so why do we not do the same?" Khaled El-Enany, Egypt's minister of antiquities, told Al Ahram newspaper. The 90-tonne obelisk from the period of Ramses II, which was moved to Tahir Square in 2019, will be mounted high to "give it historical value" and attract tourists, he added.

Monica Hanna, an Egyptologist, said the sphinxes were being endangered. "We oppose this because of concerns over the objects' safety in the pollution of Tahrir Square and [the threat to] the historical integrity of Karnak temple," she said. A group including an Egyptian MP filed a lawsuit against Enany and prime minister, Mostafa Madbouly, over the transfer.

The Arab Regional Centre for World Heritage, part of Unesco, also opposed the relocation, saying that removing them from the original site was counter to Egypt's commitment to preserve heritage.

The square, one of Cairo's busiest traffic intersections, is also a symbolic protest site. Tahrir, meaning liberation, was at the centre of the 2011 uprising that toppled the autocratic president Hosni Mubarak. It became a meeting place for millions of Egyptians who fought security forces for control of the city centre. 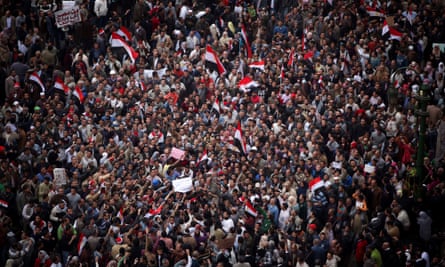 Demonstrators in Tahrir Square in February 2011. Critics say siting antiquities there will erase its recent history as a focal point for protests. Photograph: Tara Todras-Whitehill/AP

In the years since 2013, when a military coup brought the current president, Abdel Fatah al-Sisi, to power, the square retained its symbolism despite a widespread crackdown on opposition and a de facto ban on protests. A move by the government in 2013 to erect a memorial there to the almost 900 people killed in the 2011 uprising brought scorn from activists, who threatened to destroy it. A small spate of protests last year triggered a full lockdown of the square and the surrounding area by Egyptian security forces, in a show of force intended to curb any fresh uprising.

"It covers over the recent memory that is alive in the minds of many people, with something historical that has no political connotations or significance," she said.

The installation will cap years of government efforts to remove traces in downtown Cairo of the 2011 uprising. Political murals and graffiti have been erased, and a parking garage built so that the entrance covers a corner of Tahrir Square.

... in the coming year, and the results will define the country for a generation. These are perilous times. Over the last three years, much of what the Guardian holds dear has been threatened – democracy, civility, truth. This administration has cleared out science and scientists across all departments. America's reputation as a competent global leader is in peril. Truth is being chased away. But with your help we can continue to put it center stage.

Rampant disinformation, partisan news sources and social media's tsunami of fake news are no bases on which to inform the American public in 2020. We believe every one of us deserves equal access to fact-based news and analysis. So we've decided to keep Guardian journalism free for all readers, regardless of where they live or what they can afford to pay. This would not be possible without the generosity of readers, who now support our work from across America in all 50 states.

Our journalism relies on our readers' generosity – your financial support has meant we can keep investigating, disentangling and interrogating. It has protected our independence, which has never been so critical. We are so grateful.

We hope you will consider supporting us today. We need your support to keep delivering quality journalism that's open and independent. Every reader contribution, however big or small, is so valuable. Support the Guardian from as little as $1 - it only takes a minute. Thank you.