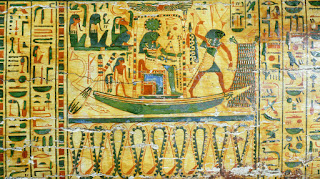 It sounds like a phenomenon that would happen in some bizarre alternate universe. You would stare up into a cosmic bowl of iron, which sometimes cracked and sent shards of itself hurtling to Earth.

This is how ancient Egyptians saw the sky. Among other things, it was a great bowl of iron holding an otherworldy ocean that the dead would sail across to reach the afterlife. Egyptologist and Brown University Ph.D. candidate Victoria Almansa-Villatoro, who recently published a study in The Journal of Egyptian Archaeology, now has new insight into the N41 sign (the half-circle hieroglyph that repeats itself several times above). This hieroglyph was associated with iron, water and women. But what does it tell us about meteor showers and mystical beliefs?

"In the Pyramid Texts, the image of the sky as an iron container of water that was also the sky goddess Nut's womb resulted on the sign being used for metals (such as "iron"), womanhood (such as "uterus"), or water (such as "well")", Almansa-Villatoro told SYFY WIRE." Ancient Egypt was a culture full of iconicity and symbology, as it is clear from its writing system, but also from the magical principles of Egyptian art for which an image could be as effective and real as the idea that it represented."

Before the advent of smelting in the Iron Age, iron only appeared in meteorites that had fallen from above, and its heavenly origins made it sacred to most Egyptians. King Tutankhamun was buried with weapons made of meteoritic iron. Egyptian hieroglyphs often have multiple meanings, so the triple association N41 has is not unusual. Almansa-Villatoro was able to shed new light on its meaning after analyzing and reinterpreting the Pyramid Texts. These 4,300-year-old carvings on the inner walls of pyramids, which are also the oldest known religious texts in the world, were spells meant to guide dead kings and queens to the afterlife.

"The Pyramid Texts continuously refer to the opening of the iron (calling it by its name, bjA), and its separation from the sky," she said. "This is a clear metaphor for the opening of the Primeval Egg which the king needs to break in order to reverse the natural order birth-death and be reborn. The sky is an iron container, but it is also Nut's womb and an egg. A split egg takes an oval shape that resembles the N 41 sign, like a container. It had a recurrent association between opening and regeneration and creation, such as in the Opening of the Mouth ceremony, or the primeval separation between earth and sky."

The Opening of the Mouth was a death ritual conducted by a priest wearing the mask of the jackal-headed embalming god Anubis. He would would touch the mouth and eyes of the mummy with netjeru blades that would enable the dead to see and eat and drink again in the afterlife. While many of those found were obsidian, some were made of meteoritic iron, which was used for luxury or ceremonial items. The priest designated as the "opener of the mouth" also lived in the city of Letopolis, which was represented by the thunderbolt of the god Seth and thought to be a site of ancient meteor showers. Egypt is though to have been hit by at least one meteorite in the last 5,000 years, so it would make sense if that is where celestial iron was found.

After death, the pharaoh or queen was believed to have to sail across the sea in the sky, which explains the elaborate boats found in some pharaohs' tombs, and break the iron door to the realm of the gods. You an actually hear a modern interpretation of this journey in the Nightwish song The Pharaoh Sails to Orion. This ocean-sky was also the womb of Nut, in which the deceased would be reborn, and other gods who were associated with the metal that Egyptians viewed as mystical.

"Most explicit is the association of iron and Seth, Sokar (a metalworking god who sails the sky on a boat with an iron prow — a metaphor for a comet in the sky), and obviously Nut, since she is the sky itself, and bjA is nothing but her womb," explained Almansa-Villatoro. "Osiris is the deceased and transfigured king, just like Horus is the living king. The actual pharaoh that owned the Pyramid Texts is commonly referred to as Osiris plus the name of the pharaoh. Osiris King has to ascend the sky to become eternal like the Imperishable Stars, the circumpolar stars of the northern sky that do not set below the horizon."

Ancient Egyptians had a complex and somewhat kaleidoscopic way of seeing both their divine pantheon and reality. This is also how this highly advanced civilization approached the universe, and religious beliefs often merged with actual science. The sky was not just Nut's womb and an iron vessel, but a cosmic ocean that the sun was ferried across every day. Their astronomical knowledge was vast enough that they used it to build certain monuments precisely enough to align with the cosmos. When the Sphinx was built, it was intentionally positioned to have the sun rise and set over its shoulder. The Egyptians were also apparently onto something with their vision of iron in the sky.

"The iron container is a cosmology represented in the Pyramid Texts, which is a religious document, and thus is only a partial truth. Now, the fact that they recognize that the sky is, at least partly, made of iron is a huge scientific achievement: it means that they knew that something above the earth contained iron," Almansa-Villatoro said.

Just try to fathom all this next time you're stargazing.