The American Scholar: The Story of Egypt - Stephanie Bastek


The Story of Egypt 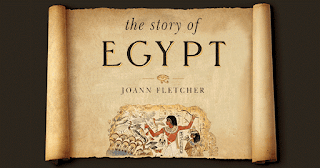 
In the mythology of Hollywood—think of such movies as Land of the Pharaohs, The Ten Commandments, Cleopatra, even The Prince of Egypt—the pharaohs are always men, usually bad. But the very first Egyptian monarch to bear the title of pharaoh was actually a woman—and a woman who dressed in male clothing and used feminine pronouns, no less. Upon her coronoation, Hatshepsut, who ruled from 1473 to 1458, “received the crowns of Upper and Lower Egypt, the sceptres, and the tie-on false beard, as worn by Khentkawes I a thousand years before.” As Joann Fletcher describes in her new book, The Story of Egypt, this female pharaoh continues to confound our misconceptions about the ancient society that flourished on the banks of the Nile.


Since such women are usually omitted from accounts of Egypt’s history, Hatshepsut is often cited as an exception that proves the rule. For according to one historian, this was ‘a wholly new departure for a female to pose and dress as a man … flaunting a royal titulary,’ while another claimed that ‘the conventions of the court were all warped and distorted to suit the rule of a woman.’ In fact, Hatshepsut has been described as everything from ‘this vain, ambitious and unscrupulous woman’ to a ‘wicked’ and ‘detested stepmother.’

Although she has more recently been somewhat rehabilitated as ‘a resolute and self-controlled woman’ and a veritable ‘Joan of Arc,’ the question ‘will Hatshepsut become a feminist icon?’ is surely a century too late. For her achievements were fully appreciated by the suffragettes, particularly by one late-nineteenth-century vice-president of the Women’s Suffrage League, who praised the ‘genius and energy of this extraordinary woman,’ following her lead to create two of the world’s leading Egyptological institutions, the Egypt Exploration Society and the UK’s first chair in Egyptology at University College London.

But regardless of her mixed press, ‘it is generally agreed that, by year 7 of Tuthmosis III, Hatshepsut had adopted her ultimate public guise: she would henceforth be shown as a male king—wearing crowns and clothing typical of male pharaohs and performing all the rituals required of them—but nonetheless be consistently referred to in the accompanying texts by feminine pronouns’—all appropriate for a female king who still fully acknowledged her male co-ruler.

Holding full royal titles, Hatshepsut was ‘King of Upper and Lower Egypt’, Maatkare (‘Maat is the soul of Ra’); ‘Daughter of Ra’, Khnemet-Amen (‘Joined with Amen’); ‘the Horus’, Weseretkau (‘Mighty of Souls’); ‘She of the Two Ladies’, Wadjrenput (‘fresh in years’); ‘the Golden Horus’, Netjeretkhau (‘divine of appearances’). And with the feminine ending added to make the son a daughter, the lord a lady and the word ‘Majesty’ feminine, her advisors coined another useful title—‘the one from the palace’ or ‘great house’, literally per-aa and now pronounced ‘pharaoh.’


This selection is excerpted with permission from Joann Fletcher’s The Story of Egypt. Reprinted by arrangement with Pegasus Books. All rights reserved.