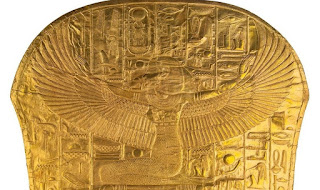 Long after Egypt's other gods had faded into obscurity, the goddess Isis was still worshipped far beyond Egypt's borders, throughout the Mediterranean, well into the 6th century.

Temples to Isis were built in Iraq, Greece and Rome, with a well preserved example discovered in Pompeii, originally built during the reign of Emperor Augustus.

We first meet Isis in the Old Kingdom's Pyramid Texts as the sister-wife of Osiris: 'Isis, this your brother is here, Osiris, whom you have preserved alive. He lives! He lives!'

The legend develops that she discovered and reunited the pieces of her husband's body, murdered by Seth, and through her magical powers, brought him back to life.'

This, together with the lengths that she went to in protecting their son, Horus, saw Isis revered as the ideal loyal wife and devoted mother.

Isis is normally depicted as a woman wearing a tight dress, with her name hieroglyph on her head.

Here she kneels at the base of the foot of the middle coffin of Tutankhamun, her wings spread in protection. This is the second of the three coffins that were originally placed one inside the other in Tutankhamun's tomb.

In myth, Isis is often portrayed as a mourning widow at either end of Osiris' body, whom she magically revives as a mummy so as to conceive their son, Horus. This is why Isis is often pictured at the feet of coffins, as all kings become Osiris in death. Isis' presence provides powerful restorative magic that helps in the king's resurrection in the afterlife.