There Was A Giant Sphinx On Fairfax Avenue In The 1920s: LAist

There Was A Giant Sphinx On Fairfax Avenue In The 1920s 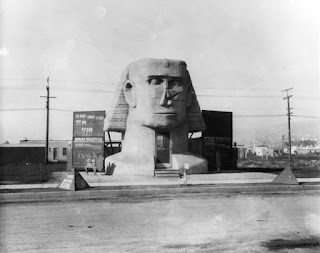 At one point in time, a Sphinx could be found along Fairfax, seemingly out of nowhere, entirely out of place. This piece of programmatic architecture housed the The Sphinx Realty Company, and it was built during a time that was big on novelty architecture, and even bigger on Egyptian culture.

It is believed that the building at 537 N. Fairfax was constructed around 1926, possibly even before that. Old photos show the realty firm's signs—some shaped like camels—advertising apartments and homes nearby. The address in modern times appears to be a parking lot.

In The Colossus of Roads: Myth and Symbol Along the American Highway, author Karal Ann Marling wrote about Los Angeles' many mimetic buildings, pointing out that—like many things here—a Sphinx had very little do to with Southern California.

Sphinx Realty lacked even that minimal confession to sober salesmanship. The company, apparently, sold neither cemetery plots nor spaces in Forest Lawn, and no more than its share of arid building lots in sunbaked subdivisions. Rather than a building warped into a colossal figure, this is a preexisting colossal statue, first shrunken in size and then scooped out to form a building. The content of the signage or symbolism, on both practical an aesthetic levels, is hopelessly cloudy. The passerby might easily postulate that Sphinx Realty is an ancient and therefore an honorable firm, or, conversely, that it is a trendy Egyptomaniac's answer to King Tut's recently discovered tomb, filtered through the Hollywood neo-Arabianism of Valentino and Theda Bara. Whatever the intention, the Los Angeles Sphinx is as freakish and enigmatic a presence as its famous prototype. 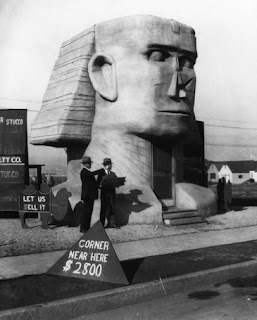 
Los Angeles was at the forefront of co-opting Egypt's ancient culture. In a Vanity Fair article about the 1920s Egyptian obsession in America, author Bruce Handy notes that L.A. developer Charles Toberman (aka Mr. Hollywood) may have "had a premonition that the Western world was on the verge of one of its periodic waves of Egyptomania."

Toberman was one of the people behind Grauman’s Egyptian Theatre, which was built in 1922, the same year that Howard Carter and company entered Pharaoh Tutankhamun's tomb in the Valley of the Kings. This event is what sparked an interest in ancient Egypt in other parts of the world, impacting fashion, entertainment and architecture. And as Handy points out, "If the opening of King Tut’s tomb was a milestone in archaeology, the opening of Grauman’s Egyptian was a milestone in archaeological kitsch. And it was this one-two punch, separated by mere weeks, that would ignite a vogue for Egyptian-themed theaters in America," and, well, realty companies.

While it is the most jarring example of Roadside America kitsch, the Sphinx Realty building wasn't the only Sphinx in town—a pair of Sphinxes can be found outside of the Scottish Rite Cathedral in Pasadena, built in 1925. And Esotouric's Kim Cooper reminded me that there are also two pyramid-shaped tombs in the Angelus-Rosedale Cemetery, a historic graveyard established in 1884, notable for being the first cemetery in L.A. that was inclusive to all races. (It’s also where Buffy Summers and the Scooby Gang would often patrol for vampires in Buffy the Vampire Slayer in scenes not shot on a lot.)

Down in the Guadelupe-Nipomo Dunes, archeologists uncovered yet another Sphinx in 2012, covered by sand. This one dated back to 1923, and was left behind by director Cecil B. DeMille after he wrapped The Ten Commandments.

You can get a glimpse of the lost real estate Sphinx in the video below, which contains scenes from Rick Prelinger's No More Road Trips.