Glassmaking may have begun in Egypt, not Mesopotamia | Science News 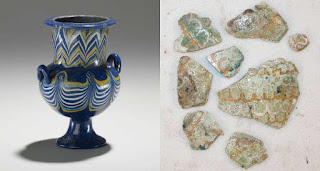 GLASS CONTRASTS  Glassmaking started in ancient Egypt, not the Near East as often assumed, researchers say. Approximately 3,400-year-old fragments from a decorated glass vessel found in Iraq (right) may even represent a fairly crude attempt to copy more advanced Egyptian glass colors and designs (left) from the same time.

SAN ANTONIO — Ancient Mesopotamians have traditionally been credited with inventing glassmaking around 3,600 years ago. But Mesopotamians may have created second-rate knock-offs of glass objects from Egypt, where this complex craft actually originated, researchers reported November 19 at the annual meeting of the American Schools of Oriental Research.

Arguments that glass production originated in Mesopotamia largely rest on artifacts recovered nearly a century ago at Nuzi, a site in what’s now Iraq. Glass finds there included colored beads, vessels and pendants.

It’s unlikely those discoveries come from the dawn of glassmaking, said conservation scientist Katherine Eremin of Harvard Art Museums. She and an international team of colleagues, led by archaeologist Andrew Shortland of Cranfield University in England, determined that glass items excavated at Nuzi represent a mix of ancient Mesopotamian items and glasswork from later occupations, some as recent as the 1800s. Genuine Mesopotamian glassware comes from sediment recently dated to around 3,400 years ago, later than initially thought, Eremin added.

“Nuzi glassmakers may have consciously copied Egyptian styles rather than leading the way in the glass industry,” Eremin said.

Further study of ancient glass objects from other sites is needed to resolve the question of whether glassmaking originated in Egypt or the Near East, she said.

A. Shortland et al. The origins of glass: the Near East or Egypt? Annual meeting of the American Schools of Oriental Research, San Antonio, November 19, 2016.