The American director Wes Anderson, known from films such as "The Grand Budapest Hotel" or most recently "Isle of Dogs", and his partner, the writer and costume designer Juman Malouf, were invited by the Vienna Museum of Fine Arts (KHM - Kunsthistorisches Museum Wien) to design an exhibition according to their taste. The result is an exhibition entitled "Spitzmaus Mummy in a Coffin and Other Treasures". 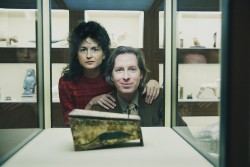 Wes Anderson & Juman Malouf: Spitzmaus Mummy in a Coffin and Other Treasures, the title of the exhibition owes its existence to a mummified rodent from the Egyptian collection. / Picture: © KHM-Museumsverband, Wissenschaftliche Anstalt öffentlichen Rechts / Rafaela Proell 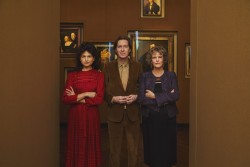 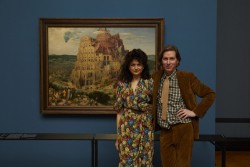 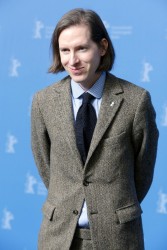 Jasper Sharp, the man for special projects at the museum, invited the two of them in 2015 to design an exhibition according to their taste, similar to projects by the painter Ed Ruscha and the ceramist and author Edmund de Waal.
These guest curators get access to all of the Kunsthistorisches Museum's holdings - more than four million objects spread across 14 collections and numerous depots - and have a free choice in terms of selection and presentation.
Anderson and Malouf spent weeks in the depots, unearthing objects that had often never been exhibited and often had to be restored to a presentable condition by restorers.

Exhibition Background
In 2012, the Kunsthistorisches Museum Vienna initiated a new seriesof exhibitions for which remarkable creative individuals are invited to present their own personal selections of objects drawn from the museum's historical collections.
The museum's collections number more than four million objects, and span a period of five thousand years.
The first exhibition, titled The Ancients Stole All Our Great Ideas, was selected and curated by the painter and draughtsman Ed Ruscha.
This was followed in 2016 by the exhibition During the Night, selected and curated by the British ceramicist and writer Edmund de Waal.
The third instalment of the series, has been selected and curated by the filmmaker Wes Anderson and his partner, the writer and illustrator Juman Malouf.
With assistancefrom the museum's staff of curators and conservators, Anderson and Malouf have assembled more than 400 objects drawn from all fourteen of the museum's historical collections.
Among them are Egyptian, Greek and Roman antiquities, Old Master paintings, selections from the Kunstkammer and the Imperial Treasury, items from the Imperial Armoury, Coin Collection, and Collection of Historic Musical Instruments, as well as pieces from the Theatermuseum, the Weltmuseum, the Imperial Carriage Museum, and Schloss Ambras Innsbruck.
A handful of special guests from the Natural History Museum are also included. Particular attention was given to the museum's storage: more than 350 of the objects have been brought from depots, with many of them on public display for the very first time.
The result is titled Spitzmaus Mummy in a Coffin and other Treasures.
The gathering and arrangement of these treasures – from the earliest, a necklace of ceramic beads strung together in Ancient Egypt, to the most recent, a wooden monkey carved in Indonesia almost 5,000 years later – suggest the spectacular breadth, depth, history and complexity of the Kunsthistorisches Museum's collections.
The exhibition is a collaboration between the Kunsthistorisches Museum Vienna and the Fondazione Prada. The exhibition will be presented at the Fondazione Prada, Milan, from autumn 2019. It is curated by Wes Anderson and Juman Malouf, with assistance from Jasper Sharp (Kunsthistorisches Museum) and Mario Mainetti (Fondazione Prada). It is accompanied by a fully illustrated catalogue with text contributions from Sabine Haag, Jasper Sharp and Wes Anderson.
Biographies
Wes Anderson was born on May 1, 1969 in Houston, Texas. He is an American filmmaker. His films are known for their distinctive visual and narrative styles. He has received consistent praise from critics for his work. His films include Bottle Rocket, Rushmore, The Royal Tenenbaums, The Life Aquatic with Steve Zissou, The Darjeeling Limited, Fantastic Mr. Fox, Moonrise Kingdom, and The Grand Budapest Hotel. His latest film, Isle of Dogs, came out in 2018.
Juman Malouf was born in Beirut, Lebanon and grew up in London. She has designed and illustrated for theatre, film, and fashion in the US and Europe. Her first novel, The Trilogy of Two, was published in 2015.