The Temple of Montu in Luxor, Egypt, has witnessed the ebb and flow of the Nile for more than 3,300 years

Unlike the nearby Temple of Karnak, which attracts crowds of tourists, the monumental construction dedicated to worshipping Montu-the falcon-headed Egyptian god of war-has seen better days.

Many of the megaliths-the large stones used to build it-have collapsed and lie covered in weeds. The site has never been open to the public.

But for Wang Wei, a veteran researcher at the Chinese Academy of Social Sciences' Institute of Archaeology, the Temple of Montu, built in the 14th century BC, is a place full of hope.

Until Nov. 29, no archaeological research had been carried out at the temple for more than four decades. On that date, a Sino-Egyptian joint archaeological excavation began there. It marked the start of a five-year project created through an intergovernmental agreement between the two countries. The excavation team is comprised of seven Chinese archaeologists and three from Egypt.

The work is scheduled to cover 500 square meters by the end of this year. Technology such as 3D modeling is being used to represent the temple's facade. The process is meant to develop a mathematical representation of a three-dimensional surface of an object using specialized software.

Drones, however, which have been widely used by archaeologists in China for field research, are prohibited in Egypt for safety reasons.

"This brings unexpected challenges for us, but it also encourages us to come up with creative ideas as alternatives," Wang said.

He said his first trip to Egypt "came so late". When he first arrived in the North African nation for an academic exchange in 2016, archaeologists from more than 20 countries were working on 206 projects. Wang was also looking at the possibility of archaeological cooperation between China and Egypt.

"We're late-starters, but there is huge potential in our studies," he said. 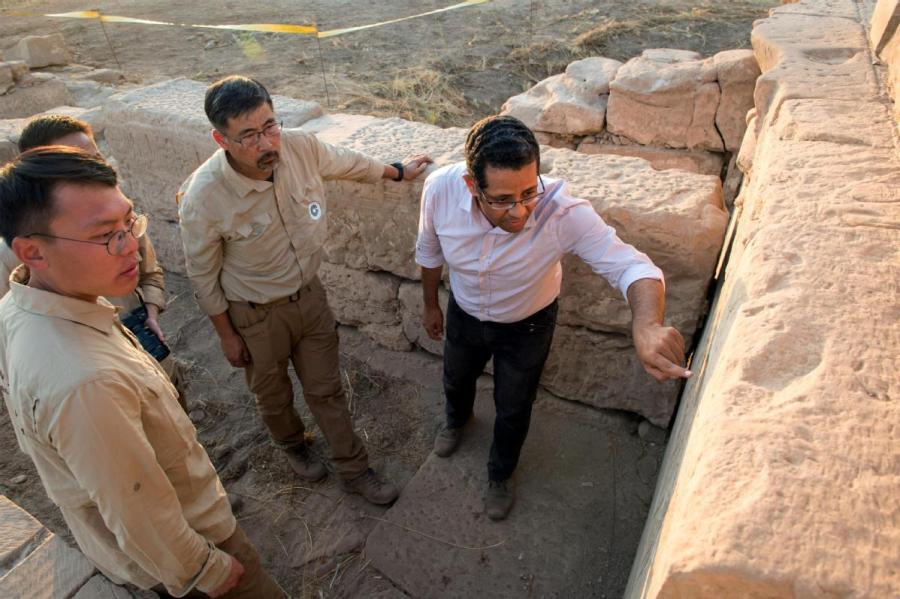 As well as excavation work, the Chinese team will partially renovate the temple, which will probably open to tourists at some stage.

"We want to put the stones back to their original position, based on the inscriptions on them. That takes expertise," Wang said.

He added that there are more than 10 established Egyptologists in China, but he is aware that the country is a newcomer to this work. In the two years spent preparing for the excavation, several international symposiums were organized by his institution to update the team on the most recent achievements in the field worldwide

A journalist from the United States once asked Wang, "Why does China want to have archaeologists working in Egypt?" He replied: "You (Westerners) have done work there for 200 years. Why can't we? It's a dialogue between two ancient civilizations."

For Chinese scholars, such overseas projects will benefit their studies at home.

An academic program was started in 2002 to explore early-stage Chinese civilization-searching for its unique characteristics-through comprehensive studies of archaeological sites nationwide.

"However, the more we discussed the topic, the more we felt that we lacked an in-depth understanding of other ancient civilizations," Wang said. "The project in Egypt offers an opportunity for comparative studies."

As a result, the Temple of Montu was chosen. It dates to the New Kingdom period of ancient Egypt, a contemporary of the Shang Dynasty (16th to 11th century BC) in China, which saw the earliest-known written Chinese characters and had a complicated sacrificial and ceremonial system.

"I believe that there will be many achievements (in comparative studies), based on the abundant information we have on the Shang Dynasty," Wang said.