In the Valley of Gods is the next game coming from Campo Santo, the same studio that brought to life Firewatch. This adventure will also be in the first-person view, but will instead have players tread through Egypt in the 1920s. The game was originally premiered at The Game Awards 2017 with this trailer  (https://youtu.be/UOoKPN2KPhg): 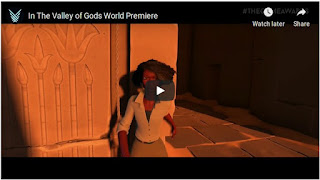 The single-player title will put players in the shoes of Rashida, who is "a disgraced former explorer and filmmaker given one last shot at the adventurous life." Somewhere in the endless sands of Egypt there is an ancient discovery just waiting to be found and Rashida must enlist the aid of Zora, who is a former partner that Rashida has promised to work alongside once more.

The story will comprise of Rashida and Zora rebuilding their relationship as they search for a thrilling discovery. Players will have to utilize a 35mm film camera in order to document the surroundings and any particular findings of value. Players may climb and traverse the surroundings so that they can better explore 1920s Egypt's ruins to find treasures of the past world. The art style and movement control from the world premiere trailer are both comparable to Firewatch from what little has been shown so far. On Campo Santo's Frequently Asked Questions page for the game they even hint that those that enjoyed playing Firewatch would be in for a treat.

Campo Santo has not outlined the system requirements required to download In the Valley of Gods, but the game's Steam page shows that it will have full controller support.

In the Valley of Gods does not have a specific release date, but is expected to release this year on PC and Mac. However, the studio has not ruled out launching the game on other platforms or making them compatible at some point down the road.