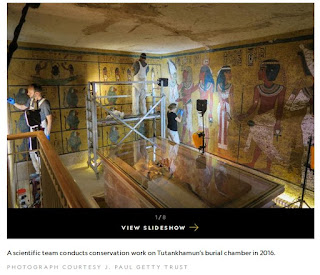 From microbial 'freckles' to sticky dust, conservators have solved some problems in the pharaoh's 3,300-year-old funerary monument, but raised new concerns in the process.

When Howard Carter unsealed the tomb of Tutankhamun in 1922, he set off a series of discoveries that would capture the imagination of the world and set off an enduring love affair with the brightly painted 3,300-year-old burial chamber of the boy king and his golden treasures. Almost a century later, a team of scientists has now completed the most significant scrutiny of the tomb to date: a decade-long project of painstaking study and conservation that has solved some mysteries but also raised new questions about the future of one of the world's most famous ancient monuments.

A symposium in Luxor this week details the overall results of the project, undertaken jointly by the Egyptian Ministry of Antiquities and the Los Angeles-based Getty Conservation Institute. Work on the 1,182 square-foot tomb, carried out by about a dozen conservators at a time, began in 2009 and was originally anticipated to wrap up by 2014. The project was delayed, however, by revolution in Egypt in 2011, and subsequent unrest in 2013.

"Everybody who goes to the Valley of the Kings wants to go to Tut's tomb," said Neville Agnew, the Getty's lead scientist and conservator on the project. An extensive documentation, diagnosis, and prognosis of the tomb's condition was required to make a plan for the future: "What happens if we do nothing? We were interested in the entire spectrum of activity, both past, present and future, and how to address those comprehensively."

One of the hallmarks of the tomb is the ubiquitous brown freckles across all of the wall paintings. Present when Carter opened the burial chamber, and exhaustively documented in photographs of the time, the "mystery spots" have endured as a source of curiosity and concern. What are they, exactly? And more importantly, are they multiplying?

A study of the spots revealed high concentrations of malic acid, a metabolic byproduct of some fungi and bacteria, which confirms that the spots are microbial in origin. DNA analysis of swabs taken from the tomb walls turned up modern organisms including Bacillus and Kocuria, but electron microscope imaging of the spots showed no remnants of the original organisms that created them. The conservators theorize that because Tut died unexpectedly, the preparation of his tomb was likely a rush job, and the freshly plastered and painted walls would have retained enough moisture for microbes to thrive in the tomb's dark, warm environment after it was sealed. The conservators can say one thing for certain, however: The spots are quite dead, have been so for a very long time, and are not growing—a fact confirmed by comparisons of photographs taken immediately after the tomb opening with those from present day.

Since they are considered part of the history of the tomb, the mystery spots won't be painted over or removed, Agnew says. That hasn't always been the view: during earlier studies, the spots have variously been sampled and treated with biocides when it was suspected they might be spreading.

One of the stickiest problems in the tomb has been the constant presence of dust. Fine-grained and thirsty, the desert dust tramped in by an estimated 500 to 1,000 daily visitors clings to every tomb surface, and is made even more tenacious since it absorbs humidity from human breath.

Though guards could wipe down the glass-covered sarcophagus that now sits in the center of Tut's burial chamber, there was no damage-free remedy for the fine, streaky veils of dust that accumulated on the tomb's fragile paintings.

So as conservators carried out the meticulous study and cleaning of the wall murals, they also worked out a scheme to tackle the long-term dust problem by installing a sophisticated air filtration and ventilation system which not only filters the dusty scourge out of the tomb environment, but also prevents excess particulates from wafting in. The regular exchange of air has also stabilized temperature and humidity within the tomb, which previously could fluctuate wildly.

And, as it turns out, the conservation project tomb revealed some new tomb jinxes: Upon removing the old viewing platform over Tut's burial chamber to mount the system's air vents, project workers were surprised to find, among heaps of lint and snippets of trash, scraps of paper with entreaties to Tutankhamun for blessings—and calls for pharaonic curses on other people.

Even though the most thorough inspection of Tutankhamun's tomb in modern history has now wrapped up, several questions about its future still remain.

The long-term impact of dust is still a mystery. Found to be comprised primarily of calcium, magnesium, aluminum, and phosphorous, it's unclear how the dust may chemically interact with the natural minerals in the paints and pigments on the tomb walls over a longer period of time.

The physical dangers of increased flooding linked to climate change is another concern and has not yet been considered, Agnew says. Although Tut's tomb is safe from direct flooding, it's constructed of the same porous, clay-containing rock as all of its neighbors in the Valley of the Kings. If adjacent tombs flood, vapor could seep through the walls and "absolutely rip apart" the tomb's plastered walls and their paintings, says Lori Wong, the Getty's lead paintings conservator on the Tut project.

Tourism remains the greatest immediate threat to the tomb. Despite the existence of a high-quality, ultra-detailed replica just a mile away, it's unclear whether the Egyptian government will ultimately restrict most public access to the original tomb (and therefore reduce a guaranteed revenue stream). France has found that eliminating visitors to the original prehistoric cave art sites at Lascaux and Chauvet, and redirecting them to replicas, has not dinted the public's interest in the monuments. A relatively new replica at Lascaux drew an estimated 260,000 visitors in 2017.

"We know the human impact on our heritage," says Pascal Terrasse, president of the Pont d'Arc Grand Project, a replica of Chauvet cave that draws more than 2,000 visitors a day. "When new technologies become available for heritage protection, managers of historical works must rely on this opportunity. We realized the world's largest fake cave because of digital techniques, which allowed us to do a very realistic job."

At the very least, Agnew says he hopes the sum of the recent conservation work on Tutankhamun's tomb results in a higher awareness of its significance for any who visit in the future.

"One should be reminded that a visit to a tomb should be one of humility and interest," Agnew concludes. "[It's] not a freak show; [it's] a tomb for a king, and we need to approach them with reverence. That's a difficult thing to get to in this age of mass tourism."