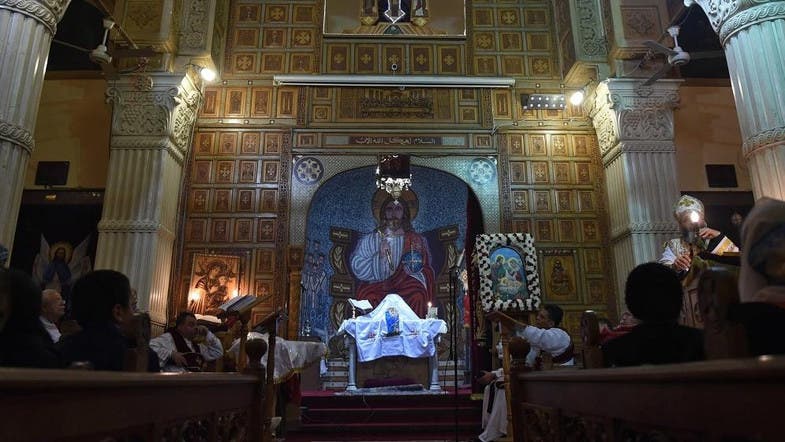 Coptic Orthodox Christians, who make up a substantial majority of all Christians in the country, and celebrate Christmas on 7 January. (AFP)
Staff writer, Al Arabiya English Saturday, 5 January 2019
Text size A A A

Monday will be a public holiday in Egypt to mark Coptic Orthodox Christmas, state news agency MENA reported on Thursday.

Prime Minister Mostafa Madbouly said 7 January will be a paid holiday for employees of the country's private and public sectors.

Coptic Orthodox Christians, who make up a substantial majority of all Christians in the country, celebrate Christmas on 7 January, following the Julian calendar.

Christians make up around 10 percent of Egypt's population.

Meanwhile, President Abdel Fatah al-Sisi extended on Friday his wishes to Egyptian expatriates on the occasion of Christmas and the New Year.

Via a Facebook post, the Egyptian President said: "I am wishing you success and happiness, and that the New Year will bring our beloved Egypt more security, stability, progress and prosperity."

Meanwhile, Egypt's security forces upped security measures around churches on the eve of the Coptic Orthodox Christmas, according to Asharq al-Awsat.

In the Shobra district north of Cairo, where many Copts reside, armed forces blocked a main street near a large church and placed metal barricades to prevent vehicles from parking in the area.

This year, Copts will celebrate their Christmas mass on January 6 amid the opening of the "The Nativity of the Christ Cathedral" in Egypt's New Administrative Capital, which lies 60 kilometers east of Cairo.

The mass will be attended by Sisi and Coptic Orthodox Church Pope Tawadros II, the Church said in a statement.