A new stop on Egypt's Holy Family Trail will soon be inaugurated in the Upper Egyptian governorate of Minya after development and restoration work. 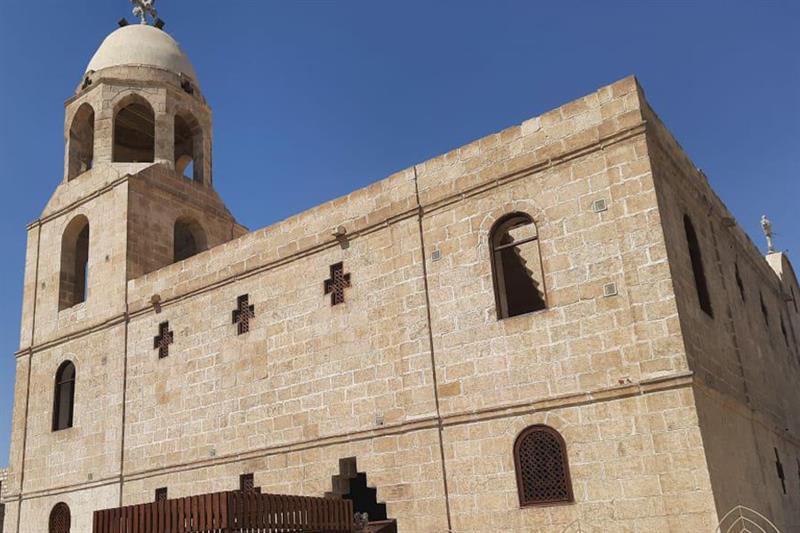 the rock-hewn Monastery and Church of the Virgin Mary

On top of the Gabal Al-Teir cliffs in the Upper Egyptian governorate of Minya stands the rock-hewn Monastery and Church of the Virgin Mary, with its distinguished architecture and wonderful view of the Nile Valley giving onto carefully cultivated fields and lush palm groves.

According to tradition, the area is called Gabal Al-Teir, meaning Mountain of the Birds, because of the thousands of birds living and nesting in the cliffs. It is one of the locations the Holy Family visited and stayed in for three days during their journey in Egypt in the early first century CE.

According to historian of Christian monasteries and churches in Egypt Abul-Makarim, while passing by the place in a small boat during the Holy Family's visit, the Virgin Mary noticed an enormous rock coming loose from the mountain and about to fall on the boat.

But the infant Jesus extended his hand and stopped the rock from falling, and the shape of his palm was imprinted on the rock. In 1168 CE, the then ruler of Jerusalem removed the part of the rock bearing the imprint and took it with him to Syria.

Osama Talaat, head of the Islamic, Coptic, and Jewish Antiquities Sector at the Ministry of Tourism and Antiquities, said that the Church of the Virgin Mary at Gabal Al-Teir was built in 328 CE by the Byzantine empress Helena (mother of the emperor Constantine) in memory of the passage of the Holy Family in Egypt. 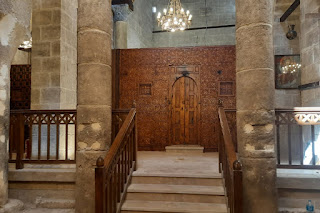 In 1938, Severus, the bishop of Minya, restored the church and removed the original stone roof in order to enlarge it.

The church consists of a nave with three sanctuaries and two side aisles and a western return aisle separated from each other by 10 rock-cut columns. On the south side of the church, the baptismal font is carved out of a column. The area in front of the middle sanctuary serves as a choir.

Hisham Samir, assistant to the minister of tourism and antiquities for archaeological projects, said that work on the restoration project at the monastery and church had begun in 2018 after the approval of the Permanent Committee of Islamic, Coptic, and Jewish Antiquities. The work was carried out in two phases, the first phase covering the western corridor and being completely finished. The second phase includes the southern corridor and is to be completed soon for the official inauguration.

The work has included the restoration of the walls and ceiling of the church, removing cracks, consolidating the walls, repairing the bell in the church tower, and its four arcades and domes. The façades of the church were mechanically cleaned, and the modern mosaic set up in 1987 on the eastern wall of its southern entrance has been replaced with another mosaic showing the journey of the Holy Family.

Fine restoration has been carried out on all the decorations and icons in the church as well as the icon frames. New lighting and fire-security systems have been installed as well as electronic gates. To enhance the visitor experience, new services have been provided, including information signs, new paths, sunshades and seats.

Facilities around the church are also being upgraded and infrastructure installed to assist visitors following the route of the Holy Family's sojourn in Egypt. The goal of the larger Holy Family Trail includes developing poorer areas and communities in the Delta and Upper Egypt, restoring archaeological sites, and creating suitable services for visitors at sites along the trail. 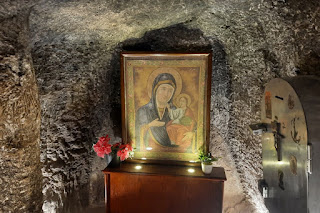 This is all part of the ministry's desire to develop spiritual tourism that can appeal throughout the year and not just during special seasons.

THE HOLY FAMILY IN EGYPT: The Holy Family travelled in Egypt for around three years and six months, with their sojourn in the places they visited varying from a few days to a few months.

The Holy Family's flight to Egypt is associated with archaeological sites from Sinai to the Delta and Assiut in Upper Egypt. The Ministry of Tourism and Antiquities in collaboration with Egypt's Coptic Church has carried out a number of restoration and development projects at churches and monasteries on the route.

These include the restoration and inauguration of the Abu Serga Church in Old Cairo, the St Abba Noub Church in Sammanud, monks' cells and other structures at the Wadi Al-Natroun Monasteries, and now the Virgin Mary Church at Gabal Al-Teir.

The late Coptic pope Shenouda III approved itineraries drawn up for Christian pilgrims visiting Egypt to follow the route in 2000. During an audience in St Peter's in Rome in 2017, Roman Catholic Pope Francis blessed an icon by a Vatican artist representing the Holy Family's flight into Egypt and effectively gave his blessing to the millions of Christians around the world who may want to follow in the Holy Family's footsteps.

The Holy Family's flight to Egypt is associated with many archaeological sites, Osama Talaat noted. They journeyed south from Palestine across the wilderness, avoiding main roads for fear of capture. They entered Egypt at modern-day Rafah, where a lone sycamore tree is said to have survived on the site since their visit.

The Holy Family reached Arish, and from there they followed the old Horus Road along the Mediterranean coast to Zaraniq, where the Byzantines later built three churches. They continued to Al-Mohamediya, and their last station in Sinai was on the northwest coast near the edge of the Delta at the city of Pelusium, now the sprawling ruin of Tel Al-Farama. Here, archaeologists have discovered traces of several Roman churches.

They then travelled south along the Pelusiac branch of the Nile, which has long since dried up. They stayed in the city of Bubastis, now the ruin of Tel Al-Basta near the modern city of Zagazig. They then went on to Mostorod, where the Virgin is said to have bathed Jesus. There is a church in Mostorod named after the Virgin Mary that was built in the 12th century and that has been recently restored.

They then turned north again towards the town of Bilbeis, travelling northwest across the Delta. When they reached Damietta, they embarked on a ferry which took them to Sammanud. The Holy Family then continued north to Borollos. The next stop was Sakha in the western Delta. Here, the Virgin Mary is believed to have held her son against a rock which retained his footprint. A relic in the church dedicated to the Virgin in the area bears this mark.

The Holy Family then moved on to the Western Desert, eventually reaching Wadi Al-Natroun, where monastic settlements were later established. They then headed for what is now Cairo, where they stopped at Ain Shams and Matariya, where they sheltered under a sycamore tree, now known as the Virgin Mary Tree. One story says that when the Virgin Mary sat there, a spring of water gushed out of the ground.

The next stop for the Holy Family was Al-Zeitoun, and then Al-Zweila. Travelling south, they reached Old Cairo and hid in a cave that is now the crypt of the Church of Saint Sergius. In what is now Maadi, they went to the place now named the Virgin's Church of the Ferry. From there, the Family took a ferry across to Memphis and embarked on a boat that carried them to Upper Egypt. 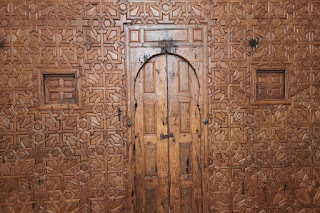 Their first stop there was on the west bank of the Nile near a village now called Ashnein Al-Nassara at a place called Al-Garnous where a monastery was later built. A church dedicated to the Virgin was built at Deir Al-Garnous in the 19th century, on the west side of which is a well that is believed to have provided the family with water.

The journey continued towards Al-Bahnasa, Samalout, and then Gabal Al-Teir, where a monastery now stands. The Holy Family took shelter in a cave that is now covered by an ancient church. They travelled to Al-Ashmounein, Armant, and Dairout, and then crossed the river again and reached the town of Al-Qusseya.

They travelled east into the desert to Mount Qussqam, perhaps the most important of all their stations, where they stayed for six months and 10 days. This place was later called Al-Muharraq, which means "burnt", as there was an abundance of grass there which had to be burned so food could be grown in its place.

Mount Qussqam is sometimes called "the second Bethlehem", and its church is held to be the first ever built in Egypt. The cave in which the family sheltered later became the altar of the Church of the Virgin Mary.

According to Ahmed Al-Nemr, a member of the ministry's scientific office, an angel of the Lord appeared to Joseph in Assiut and told him to return to Palestine because king Herod was dead. The family then went back through Assiut and then probably sailed down the Nile to Memphis, landing at what is now Al-Badrashin near the ancient capital.

Once again, they may have passed through Maadi, Babylon, and Heliopolis before crossing the desert to Palestine and finally reaching their home town of Nazareth. "Not all of these places are archaeological sites, but they all share religious, social, and cultural rituals which derive from the holy journey," Talaat said.

*A version of this article appears in print in the 7 July, 2022 edition of Al-Ahram Weekly.