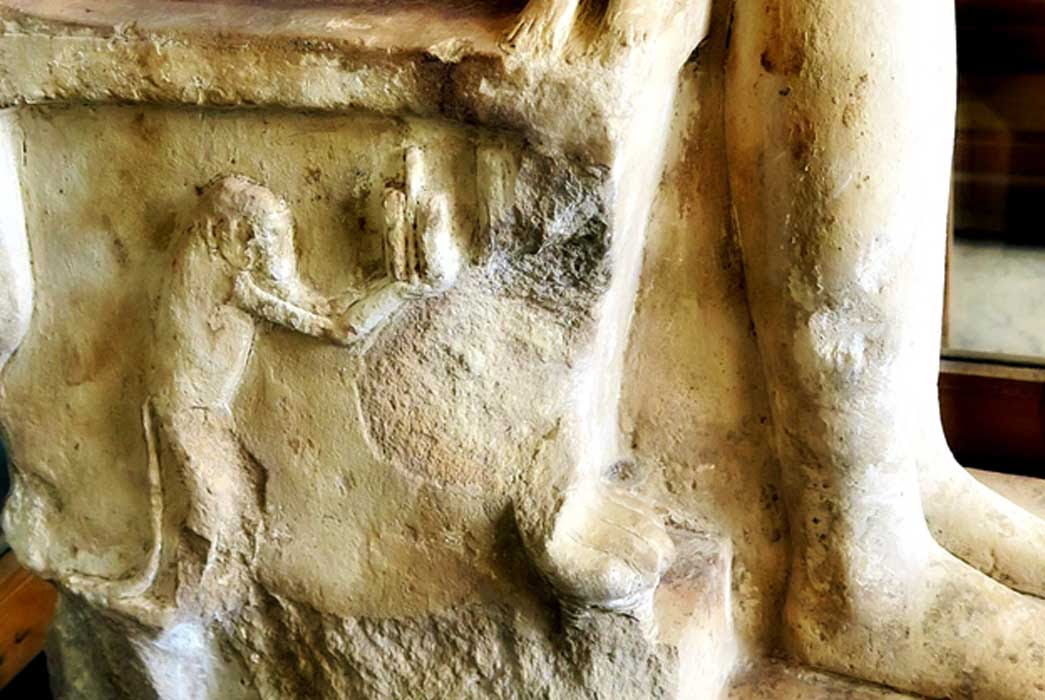 Primates of Ancient Egypt: The Bizarre and Satirical Monkeys of Amarna—Part II


Baboons and monkeys were an inalienable part of the religious and artistic landscape in ancient Egypt. A wealth of depictions of these animals exists in varied media spanning all dynasties. But it is in Amarna that we encounter some of the most intriguing portrayals of these creatures. Were the monkeys shown riding chariots and kissing a daring spoof on the royal family, who were also represented in such activities? Were the sculptors venting their own ire by reflecting the collective mood of the disgruntled citizenry against their heretic ruler, Akhenaten; or was there a more simple and religious explanation to this manner of art? 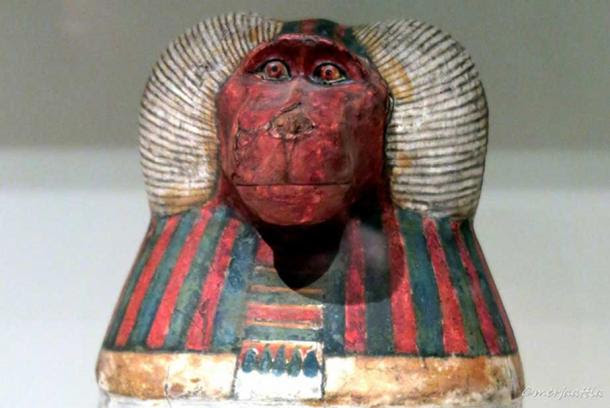 Detail from one of the pseudo canopic jars of Padiouf, a priest of Amun, shows the face of Hapy. Third Intermediate Period. Musée du Louvre Paris. Exhibition 'Animals and Pharaohs', CaixaForum Barcelona.

Monkeys were involved in policing the streets of ancient Egypt. Strange as this sounds, a few depictions show the creatures apprehending offenders. Dr Joyce Tyldesley provides in depth information on common crimes millennia ago, "The streets were by no means free of crime, however. Ostraca recovered from Deir el-Medina record a sorry procession of petty thefts, unsatisfied debts and unrestored borrowings (often concerning donkeys). The Old Kingdom tomb of Niankhkhnum and Khnumhotep includes an amusing market scene with a trained security monkey arresting a naked thief. 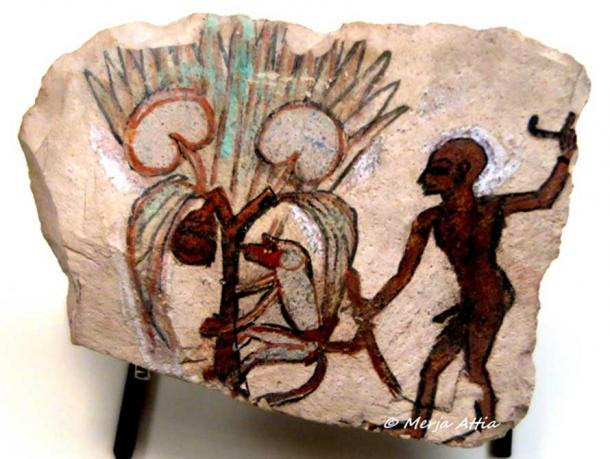 As can be seen in this ostracon from Deir el-Medina, baboons and monkeys were trained to pick fruits and dates. But not all scholars agree with this assessment. Ramesside Period. Musée du Louvre Paris. Exhibition 'Animals and Pharaohs', CaixaForum Barcelona.

"Yet the absence of the monkey led to the absence of easily portable wealth and so handicapped the would-be street robber. The lack of purses, wallets, handbags and even pockets resulted in a corresponding lack of pickpockets, bag-snatchers and other opportunist villains. The ambitious mugger could only hope to rob his victim of his or her possessions. It would have been easy to challenge an unprotected lady wearing a golden necklace, but much more difficult to make a quick getaway squawking duck or a bowl of grain". 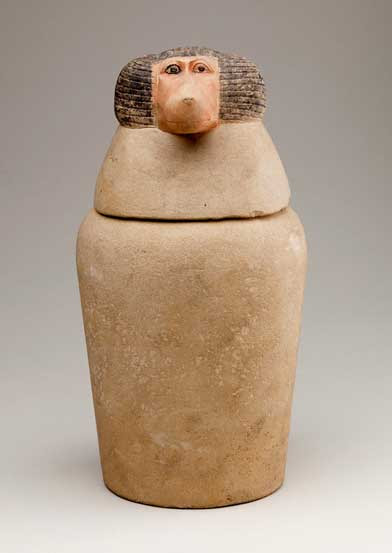 Canopic jars held the internal organs that were removed during mummification. This example, with its baboon-headed lid, held the lungs and was under the protection of the god Hapy, one of the Four Sons of Horus. 18th–20th Dynasty. Abydos. Metropolitan Museum of Art , New York.

Noted Egyptological scholar, Thierry Benderitter, of Osirisnet offers an engaging description of the "monkey scene" that appears on the northern wall of the first chamber of the Tomb of the Two Brothers, "At the far right end of the register is another person with a monkey (not a baboon, perhaps a meerkat), he is described as a security guard. These guards are often found with two monkeys (in the same way that police today use dogs), so perhaps the youth at the far end of the register is his assistant. The guard has set his monkey at a thief, shouting to the monkey: "Seize him! Seize him!" 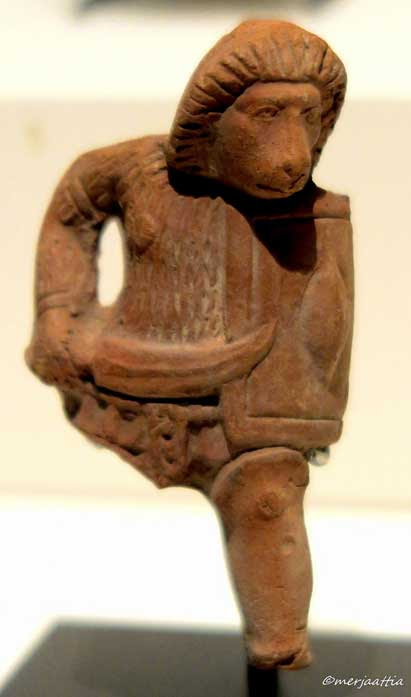 Not so Benign, after all?

But perhaps the most exciting account of encountering an ancient Egyptian monkey, albeit a mummified one, was narrated by Theodore Davis, the American financer responsible for discovering a large number of tombs and artifacts in the Valley of the Kings. He stumbled upon an unusual scene whilst excavating KV50 in 1906: "I went down and entered the chamber.... I was startled by seeing very near me a yellow dog of ordinary size standing on his feet, his short tail curled over his back, and his eyes open. Within a few inches of his nose sat a monkey in quite perfect condition; for an instant I thought they were alive, but I soon saw they had been mummified, and unwrapped in ancient times by robbers. Evidently they had taken a fragment of the wooden monkey box on which they seated the monkey to keep him upright, and then they stood the dog on his feet so near the monkey that his nose nearly touched him. The attitude of the animals suggested that the monkey was saying, "It's all over with me," and the dog, with his bright eyes and manner, seemed to reply, "Have courage, it will end all right." I am quite sure that the robbers arranged the group for their amusement... a joke 3,000 years old."

The west wall of Tutankhamun's tomb is covered with scenes from the Amduat ("That Which is in the Afterworld"). In the lower register, 12 squatting Baboon deities symbolise the 12 hours of the night through which the sun and king must travel before achieving rebirth at dawn. (Photo: Meretseger Books)

Jimmy Dunn opines that monkeys were not always considered benign and lovable creatures, "There were rites involving monkeys that are documented by early illustrations and alter by religious texts that describe the danger of monkeys "who cut off heads". In fact, the image of a baboon with raised tail serves as the hieroglyph for "enraged". The baboon's wildness made it into a dangerous, apotropaic intercessory, being the primordial creation in a mythical landscape."

While the workmen's village in Deir el-Medina yielded several ostraca with depictions of monkeys and baboons engaged in many, often hilarious, activities; it is in El-Amarna that archeologists discovered a sizeable number of carved statuettes in various stages of completion that showed the primates in peculiar scenes. Sir Flinders Petrie discovered at least twenty-three crudely modeled figures of monkeys in a dump at Amarna in 1891–92. Why were so many such similar works of art portraying monkeys produced in Akhetaten? 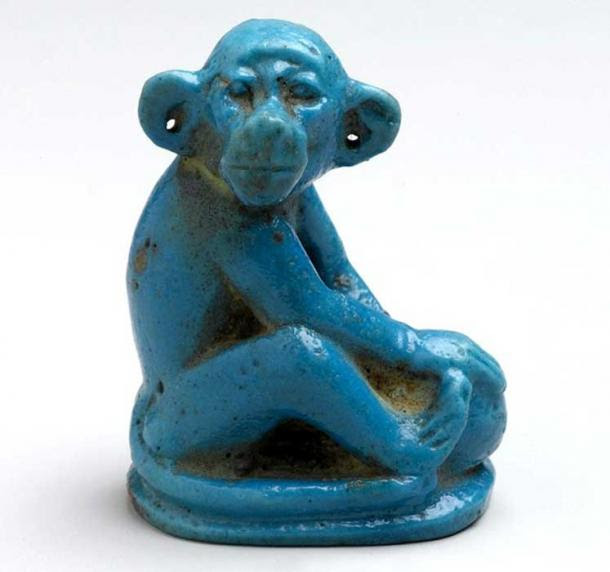 This blue glazed faience monkey seated on an ovoid base holds a round object, perhaps a ball or a piece of fruit, in its forepaws. In antiquity the animal's pierced ears had metal earrings indicating that it was a household pet. 18th Dynasty. Tell el Amarna. Brooklyn Museum , New York.

Based on the available evidence, modern interpretation of the goings-on in the new capital established by Pharaoh Akhenaten points to the fact that the populace was not pleased with the radical changes their king had ushered in, as Dr Joyce Tyldesley postulates, "The series of crude limestone figurines unique to Amarna which show families of monkeys generally aping the behaviour of the royal family is probably best explained as an early attempt at political satire: the monkeys drive chariots, play musical instruments, eat, drink, and even kiss their young." While this appears to be a plausible theory, the true meaning and purpose of these "toys" is open to debate. 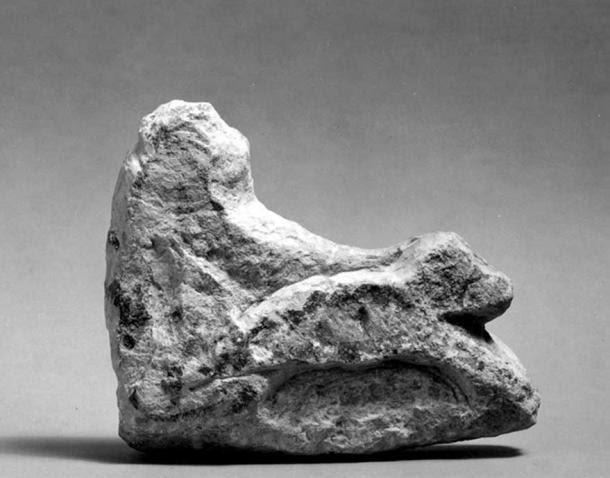 Limestone group of a monkey driving a chariot. The piece is unfinished being roughly blocked out. The back and one side have been outlined in black paint or ink though much of this is now worn away. 18th Dynasty. Tell el Amarna. Brooklyn Museum , New York.

Did the monkeys driving chariots really symbolize Akhenaten and his family; and was this a covert way in which the artists of the time mocked and displayed their negative sentiments against the Heretic king? Given the depictions of a strong police and militaristic presence on the walls of tombs in Amarna, it would have required great daring by the community of sculptors to indulge in this kind of satire – literally a matter of life and death. But these "toys" begin to make sense when one considers the possibility they were carved in honor of Thoth, or even Hathor. Of course, if one assumes this, it opens up another debate about whether Akhenaten was truly the monotheist he is made out to be. 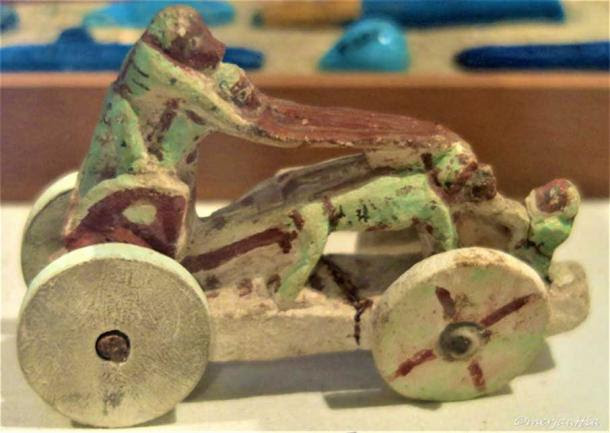 This toy is made of painted sandstone and depicts three monkeys, two on the left side and one on the right. They are stretching a robe above the horses' heads. All the figures are resting on a chariot with four wheels. 18th Dynasty. Tell el Amarna. Egyptian Museum, Cairo.

Representations of baboons and monkeys would have been tolerated at Amarna because of the association of apes with the "Eastern Ba's" and Akhenaten as sun priest being able to understand the language of the animals; as the description of the apes from a sun hymn states – "The baboons who announce Ra… They dance for him and leap in the air. They sing for him, make music and create joyful sound".

In Life and Afterlife

By the Late Period, titles such as "Priest of the Living Baboon" or "Priest of the Osiris-Baboon" were held by individuals who served gods in the court of the sanctuaries that had the form of baboon statues. They also looked after the sacred temple monkeys. The sacred troops of baboons functioned in small groups. "The best known example are those from Memphis, and Ptolemaic texts from the Necropolis at Saqqara confirm that a colony of these animals was kept in the temple of Ptah "under his Moringa-tree" in the valley. There may have been a dozen or so in the colony at any one time. One of these would have been singled out as an oracular and given the name, "the face of the baboon has spoken"," reveals Jimmy Dunn. 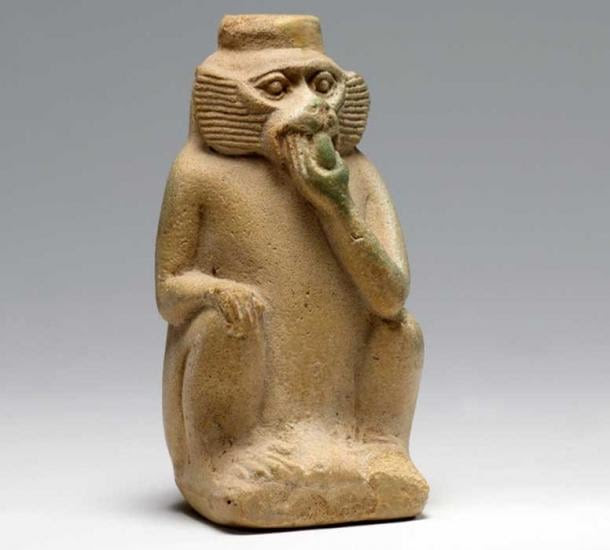 From the 26th Dynasty, mummified baboons were buried in wooden coffins. At the very beginning of the Greek Period under its first two rulers, these consecrated beasts were buried in special rooms where they were placed in costly limestone sarcophagi. During this period, they were sometimes interred in fairly large rock-cut chambers at Tuna el-Gebel. Not until the 26th Dynasty were sacred baboons buried in the ibis necropolis near this site. However, by the Ptolemaic Period, monkey mummies are found alongside those of ibises and falcons in almost every animal necropolis. The highest quality burials of monkeys are found in the well-documented baboon galleries of Memphis at Saqqara, but also in the animal cemeteries of Tuna el-Gebel, Abydos and the "Valley of the Monkeys" at Wadi Gabbanet el-Gurud in southern Thebes.

[The author thanks Merja Attia for granting permission to use their photographs in this series. The public archives of the Metropolitan Museum of Art can be accessed here.]

Top Image: Detail from the side of a seat of a group sculpture shows a baboon holding a cosmetic pot or kohl eyeliner; design by Anand Balaji (Photo credit: Merja Attia); Deriv.

Independent researcher and playwright Anand Balaji, is an Ancient Origins guest writer and author of Sands of Amarna: End of Akhenaten .

Jimmy Dunn, The Baboons and Monkeys of Ancient Egypt

Nicholas Reeves and Richard H. Wilkinson, The Complete Valley of the Kings , 2008

Joyce Tyldesley, Judgement of the Pharaoh: Crime and Punishment in Ancient Egypt , 2000