Nefertari's Vault, an Egyptian-inspired jewelry company, will be launching a new line of Nefertiti-related products with a variety of settings and styles. While these products have been in development for some time, their launch has been moved forward to better align with a special episode of Expedition Unknown, which offered a new look at the 'true' face of Queen Nefertiti. 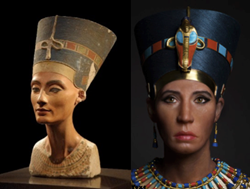 The image depicted is not in line with the centuries of known facts and history of Ancient Egyptians.

A unique combination of archaeology and computer modeling gave us a new glance at one of Egypt's most beautiful women. Up until this point, a bust housed in London provides our best guess at what Nefertiti looked like. Created in 1345 BC, this limestone bust is thought to have been created by Thutmose in Amarna, Egypt. It was discovered in 1912 by a team of German archaeologists. One of the most iconic works of ancient Egypt, it has been copied countless times. Thanks to this bust, Nefertiti became an icon of feminine beauty and a true icon of the ancient world.

The bust showcased on Expedition Unknown and the Today Show took over 500 hours to create. It showcased custom jewelry from Dior. An admirer of Nefertiti, and Egyptian culture in general, Mai Abdelal eagerly awaited the revelation. "I was so excited to see such a powerful woman brought to life," she said. Her excitement turned into shock when she saw the end results.

Although there are slight similarities between the two busts, the modern day bust with her fair skin and green eyes are a stray from the ancient Egyptian image. You can see an image of the bust to the left. "Ancient Egyptians of that time were known to have dark features, meaning olive skin and dark eyes," continued Abdelal. "The image depicted is not in line with the centuries of known facts and history of ancient Egyptians." To reinforce its respect of Egyptian culture, and its support of the more traditional depictions of Queen Nefertiti, Nefertari's Vault will be releasing two new Nefertiti pendants.

The first pendant is made with the traditionalist in mind. It showcases a bust of Nefertiti carved from 80-percent pure silver and 20-percent mixed alloys. The second Nefertiti pendant is double-sided with bright accents of cyan and navy blue. Though it's a twist on a classic, this Nefertiti pendant still remains respectful to the iconic London Bust. Both products will be available for purchase starting at 12 A.M. on March 14th.

The first part of the earlier mentioned episode of Expedition Unknown aired on February 7, 2018 on the Travel Channel. Please visit https://www.travelchannel.com/shows/expedition-unknown to learn more. You can learn more about Nefertari's Vault and their other lines of Egyptian jewelry by visiting https://www.tarisvault.net.

About Nefertari's Vault: Nefertari's Vault is a fine jewelry boutique dedicated to sharing the fashion and accessories of Ancient Egypt with the rest of the world. All of their products are made from high quality silver ranging from 80 percent to 92.5 percent of purity and imported directly from Egypt. Common themes include Egyptian pharaohs, the evil eye, and khamsas or the Hand of Fatima. Nefertari's Vault is currently headquartered in in Jackson Heights, New York and can be reached at TarisVault(at)gmail(dot)com.