Interpreting the Two Brothers (I): Alternative readings, brothers and lovers | Egypt at the Manchester Museum

Interpreting the Two Brothers (I): Alternative readings, brothers and lovers

Manchester Museum's well-known 'Two Brothers' were recently the subject of DNA analysis using a Next Generation Sequencing technique, which demonstrated a genetic link between the two men through the maternal line – confirming the texts on their coffins naming a common mother, Khnum-aa. Like most such scientific analysis, however, the DNA results ('facts') do not act as a 'magic wand' to reveal everything about the Brothers; in fact very little can be 'revealed', despite the widespread appetite for revelation and discovery. Theories concerning the (social, personal) identities of the Two Brothers tell us perhaps more about our own interests and anxieties than about ancient people. 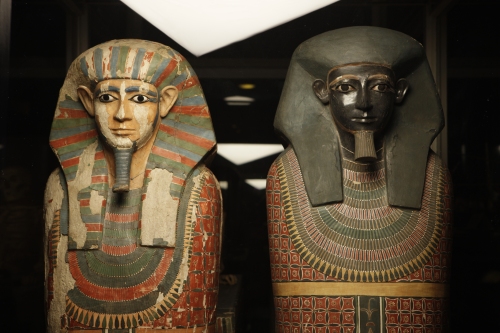 During the UK's LGBT History Month, I would like to re-visit one theory that has gained (perhaps surprisingly) little traction among the museum-going public in metropolitan Manchester, and very little attention from Egyptologists. Gregory Reeder, an independent scholar based in the US, has written several articles about a pair of much earlier (twin?) "brothers" Niankhkhnum and Khnumhotep – who are depicted in their joint Old Kingdom tomb chapel at Saqqara using iconographic conventions usually reserved for husband and wife (more on this below).

Niankhkhnum and Khnumhotep from the 5th Dynasty tomb at Saqqara

Reeder's 2005 article in the American popular journal KMT takes up the subject of the "mysterious brothers" of Manchester Museum. In a valuably critical reappraisal of the details of the tomb group, Reeder suggests a close bond between Khnum-nakht (who died around 30-40 years of age) and Nakht-ankh (who died, possibly the following year, around 60 years of age). Both men claim to have a mother who was called Khnum-aa, and a father who was a district governor, although the 1908 autopsy of the brothers' bodies showed differences considered strikingly different at the time. For Reeder the degree of difference "almost certainly rules out that they were blood relatives", and he favours Rosalie David's interpretation that one or both of the men was adopted into the family – a claim made several times in biographies of do-gooding contemporary governors.

Reeder also discusses the repeated assessment of Nakht-ankh's skeleton as that of a eunuch. The unfortunate image conjured of the Oriental harem, and a modern equation with effeminacy, is, however, deserving of critique. The resulting impression of the "elderly eunuch" adopting "the much younger ["virile", according to an 1910 anatomist] priest into his household" is evidence for Reeder (quoting David) of their "deep affection". 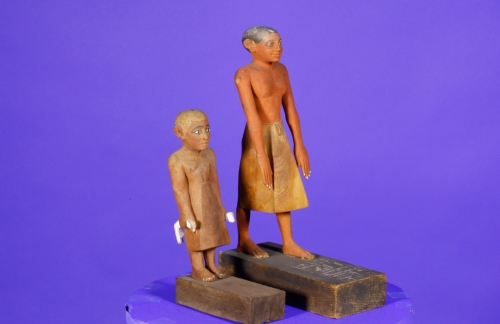 Statuettes of the Manchester 'Two Brothers' found in the coffins

To further illustrate this bond, Reeder cites the presence of a small statuette of each man in the coffin of the other. Reeder raises, but skirts around, the problematic (and persistent) theory that because the profiles of the statuettes of each man more resemble the skull of the other, they must be mislabelled. Aside from the sinister spectre of eugenics in this assessment, the implication that we must know better than the ancient Egyptians is laughable. For Reeder, the placement of the statuettes is meaningful and "subtly indicate(s) something about the relationship between the old eunuch and much younger priest."

Here we must be cautious. Very few intact coffins from the Twelfth Dynasty survive to show how common such statuette placement was – but we do have cases where the statuettes of children are included deliberately in a parent's coffin. To my mind, the (social, ritual) role of Khnum-nakht was most plausibly that of 'son' towards Nakht-ankh – the elder, and better-equipped (in materials terms, at least), half-brother.

Reeder, like many others, hoped that DNA might provide definitive proof. The recently-published evidence of a genetic link, confirming the stated familial relationship, does cast doubt on the implied idea of (quasi-)sexual intimacy between two unrelated men.

At a conference on Sex and Gender in Ancient Egypt held at Swansea University in 2006, I particularly remember Richard Parkinson (formerly a curator at the British Museum and long-term advocate of LGBT visibility in museums, now Professor of Egyptology at Oxford) declaring that "as an out, gay Egyptologist," while part of him wished to see the Old Kingdom "brothers" Niankhkhnum and Khnumhotep as a same-sex couple, there simply wasn't the evidence for it. As an out gay Egyptologist myself, I am inclined to agree with him.

The cultural construction of identities (especially of past cultures) is notoriously difficult to interpret, and previous interpretations seem bound to have favoured hetero-normative readings. In each case, we ought to acknowledge that any modern reading is contingent, and coloured by what we might hope to find.