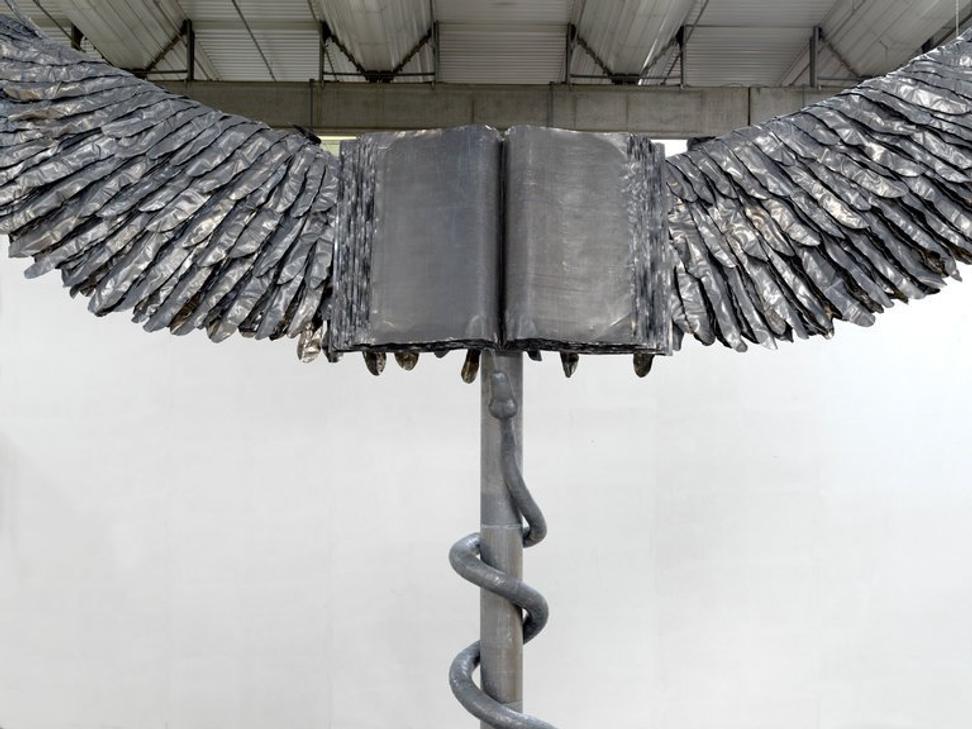 It explores longtime motifs in his work that, in this context and contemporary moment, resonate in powerful new ways.

The first site-specific outdoor public sculpture ever to be commissioned for the United States from Anselm Kiefer (b. 1945) will be unveiled this spring at the top of Rockefeller Center's Channel Gardens, facing Fifth Avenue (May 2-July 22, 2018). Titled Uraeus, the work consists of a gigantic open book with eagle's wings 30 feet in span, both made of lead, on top of a 20-foot-tall lead-clad stainless steel column. Clustered around the base of the column are further outsize lead books, while a large snake coils up the column. Lead is one of the artist's preferred materials for its soft, fluid properties traditionally associated with alchemical transformation, especially its second stage: dissolution. In Kiefer's mind alchemy is "a symbol for the artist…you have to destroy and then recreate." Uraeus extends his vocabulary of striking mythic forms, presented at an arresting new scale. It explores longtime motifs in his work that, in this context and contemporary moment, resonate in powerful new ways. Kiefer is the most prominent German artist of the generation born in or shortly after World War II, a figure of international standing who was recently awarded the J. Paul Getty Medal (2017).

The sculpture's cryptic title, Uraeus, refers to the erect shape of the Egyptian cobra, associated with the serpent goddess Wadjet and a symbol of power and divine authority. The wings evoke the headdresses and necklaces worn by Egyptian royalty in homage to the vulture goddess Nekhbet. Wadjet and Nekhbet were the guardians of Lower and Upper Egypt, respectively, and following ancient Egypt's unification, became the joint patrons of the civilization.

When conceiving this monumental sculpture, Kiefer was recalling Friedrich Nietzsche's famous philosophical work of fiction, Thus Spoke Zarathustra (1891), with its ideas of the will to power, the death of God, and the Übermensch or superman, as the ultimate aspiration of human beings. Nietzsche described Zarathustrathus: "This book, with a voice bridging centuries, is not only the highest book there is, the book that is truly characterized by the air of the heights—the whole fact of man lies beneath it at a tremendous distance—it is also the deepest, born out of the innermost wealth of truth, an inexhaustible well to which no pail descends without coming up again filled with gold and goodness."

Narrative is an essential element to Kiefer's work, and his 50 year oeuvre is filled with a broad range of cultural, literary, and philosophical references. Kiefer recently said, "I was always fascinated with books, and I have made a lot of books: they are more than half of what I make." He found formal cues in the many allegorical figures embedded in Rockefeller Center's classical Art Deco architecture, such as the gilded, winged figure of Mercury located in the decorative details above the Channel Gardens on Fifth Avenue. For over 40 years, Kiefer has referenced wings in his work, building on his interest in technologies of flight: from the natural wings of the bird, to the man-made engine of the airplane used in warfare, to the spacecraft launched to explore our solar systems and universe.

In Kiefer's imagination, word and image, sacred text and icon, have the power to soar upwards, transcending reality and offering hope of redemption. Uraeus is both gigantic lectern and altar. The presence of the snake that insinuates itself at the foot of the column introduces an element of danger and death, as if the monument is being undermined. Yet in more than one mythology the serpent is a creature of wisdom and secret knowledge. Kiefer's wide-ranging art, which embraces historical memory, politics, religion, and myth, is layered with such multiple meanings and paradoxes.

"A public commission several years in the making, the iconography of Uraeus evokes classical mythology, soaring with possibility, yet bound by the weight of history," says Public Art Fund Director & Chief Curator Nicholas Baume. "Today, the digital age proliferates and democratizes knowledge as never before, while the very idea of truth is questioned and debated. One of our most literary artists, Kiefer returns to the symbolism of the book: elevated and powerful but also dangerous and vulnerable."

"Anselm Kiefer is an artist with a singular vision and the courage to look history in the eye. His resulting paintings, sculptures, and drawings are as powerful as they are poetic and timeless, striving to reconcile human reality with divine promise. Nowhere has this been made more clear than in New York City," says Larry Gagosian. "Thirty years after his ground-breaking exhibition at the Museum of Modern Art, and immediately following his extensive survey of works on paper at the Met Breuer on Madison Avenue, Kiefer once again proves he is a masterful artist with boundless creativity. Located amidst the hub of Rockefeller Plaza, his sculpture for Public Art Fund is a monumental triumph."

"Since it was built, Rockefeller Center has been a destination for New Yorkers and visitors to enjoy unmatched, thought-provoking art and architecture," said Tishman Speyer President and CEO Rob Speyer. "It's a pleasure to continue that tradition with the Public Art Fund and Gagosian to bring Anselm Kiefer's remarkable work to the Center. We're certain that Uraeus will be enjoyed by the thousands who pass through Rockefeller Center each day and remembered for years to come."

Anselm Kiefer: Uraeus is presented by Gagosian and organized by Public Art Fund and Tishman Speyer. It will be on view from May 2 – July 22, 2018 at the Fifth Avenue entrance to Rockefeller Center's Channel Gardens between 49th and 50th Streets in Midtown Manhattan.

In conjunction with the exhibition, Anselm Kiefer will give a Public Art Fund Talk in collaboration with the Vera List Center for Art and Politics at The New School on April 30 where he will discuss his new work and past public art projects.