No deadline for restoration

The gold funerary mask of King Tutankhamun is finally in intensive care to correct the botched restoration of its beard, writes Nevine El-Aref 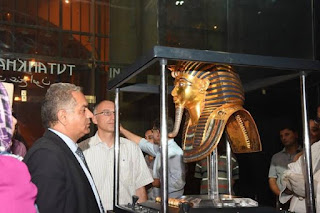 Visitors to the Egyptian Museum will no longer be able to admire the unique gold funerary mask of King Tutankhamun. Earlier this week the mask was temporarily removed from its permanent display at the Jewellery Hall on the museum’s second floor for restoration.

In January it was reported that the blue-and-gold beard of the mask had been broken during cleaning work at the Egyptian Museum and conservators had hurriedly glued the beard back on with epoxy resin, damaging the artefact.

At that time, Minister of Antiquities Mamdouh Eldamaty asked German conservator Christian Eckmann, a specialist in metal objects, to examine the mask and write a detailed report on its condition. Eckman felt that the mask was in good condition, reporting that it had not been been seriously endangered.

“The measures that were taken to restore the mask in 2014 are all reversible,” he said. Eckmann went on to explain that Tutankhamun’s mask, when it was discovered in the Valley of the Kings on Luxor’s west bank, was found resting on the mummy’s face in two pieces. These pieces were the mask of the king’s face and the protruding beard.

The mask and beard were transported to the Egyptian Museum in Cairo, where they were exhibited as two pieces in one showcase for almost two decades. In 1941, the objects were glued together as one piece, and in 1944 the beard became loose and was reattached.

In August 2014, during repairs to the mask’s showcase, a worker accidentally touched the beard and it came loose again. “It was a regular accident,” Eckmann explained, adding that the beard had most probably come off because the glue used in 1941 had dried and was no longer effective.

Eldamaty then formed a committee to examine the mask and identify the optimal materials to use in its restoration. The committee, led by Eldamaty, includes Tarek Tawfik, director of the Grand Egyptian Museum, Eckmann and a German CT-scan expert.

The committee carried out preliminary studies on the mask and Eckmann travelled to Germany with the results, where he created a rigid foam replica of the mask using the proper materials.

He is now in Cairo to start the restoration process with his colleagues. Meanwhile, the mask has been moved to Room Number 55, on the museum’s second floor, which has been transformed into an exclusive laboratory for the restoration.

“The transportation process of Tutankhamun’s mask was like a critical surgery,” Minister of Antiquities’ Assistant for Museums Affairs Yasmine Al-Shazly told Al-Ahram Weekly. She explained that before the mask was moved it was first covered with a special mould of rigid foam to ensure its safe transportation. The mould with the mask was then placed inside a wooden box to Room 55.

The equipment was provided by Germany, El-Shazly pointed out, which offered Egypt a 50,000 euro grant to help cover restoration costs. Room 55 is under 24-hour surveillance by CCTV and police personnel. “The team did not leave anything to chance,” she said.

Tawfik, who is a member of the scientific team of the restoration of Tutankhamun’s mask, told the Weekly that restoration of the mask will be carried out in two phases.

The first phase, he explained, includes the scientific and technical examination and documentation of the mask itself, as well as the beard. This, he asserted, would provide detailed information on the original technique and the materials used by ancient Egyptians and Tutankhamun’s tomb discoverers in 1922 to glue the beard to the face.

The second phase, Tawfik said, will include selection of the best material to reaffix the beard to the face and the beginning of the concrete restoration work.

“The negative form of the mask or the rigid foam mould used to cover the mask is the best solution created by German restorer Eckmann to guarantee the safe transportation and restoration process,” Tawfik said.

He pointed out that the mould will enclose the mask throughout the restoration process as it is open around the area of the beard to enable restoration work and guarantee a safe condition for the mask itself.

“Until now, no deadline has been decided for the completion of restoration work but we hope that it will be finished in December to encourage tourists to spend their Christmas holiday in Egypt to admire Tutankhamun’s mask after its restoration,” Tawfik said.