Egypt: where gods are born and go to die » The Spectator


Egypt: where gods are born and go to die 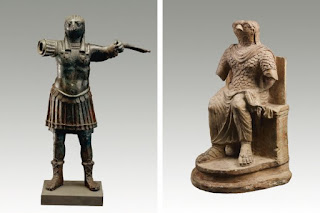 Over the stupefyingly long course of Egyptian history, gods have been born and they have died. Some 4,000 years ago, amid the chaos that marked the fragmentation of the original pharaonic state, an incantation was inscribed on the side of a coffin. It imagined a time when there had been nothing in existence save a single divine Creator. ‘I was alone in the emptiness,’ the god proclaimed, ‘and could find no place to stand.’ Nevertheless, beside him, he could feel the gods that were yet to exist. ‘They were with me, these deities waiting to be born. I came into being and Becoming became.’ The gods emerged, to reign first on earth and then in the heavens, and history began.

Outside Egypt itself, the British Museum is as good a place as any to trace their evolution: how, for millennia, temples were raised in their honour, and rituals performed. What happened to them, though, that eventually they came to fade and be forgotten? A new exhibition at the museum, Egypt: faith after the pharaohs, explores this momentous question. Certainly, as the show makes clear, the extinction of native rule in Egypt did not spell the immediate death of her ancestral gods. Instead, under first the Persians, then the Greeks, and finally the Romans, they endured as they had ever done, seemingly immortal. Whether in their temples or painted on the walls of tombs, the same portraits were reproduced century after century: of Isis, the divine mother feeding Horus, her baby son, or of Horus himself, grown to manhood and sporting the head of a hawk, or of Anubis, jackal-featured protector of the dead.

Not only did Egypt’s conquerors make sure to parade their respect for the country’s gods, but they added to its pantheon. The greatest temple in Alexandria, a city founded on the Mediterranean by a Macedonian king, was raised in honour of Serapis, a deity who combined a thoroughly Greek beard and robe with a primordially Egyptian lineage. Artificially multicultural he may have been — but the popularity of his cult, still going strong centuries after Egypt’s absorption into the Roman Empire, potently demonstrated just how fecund the country remained as a womb of gods.

Already, though, his doom was brewing. ‘On all the gods of Egypt I will execute judgment: I am the LORD.’ To the Jews, redemption from bondage to Pharaoh constituted the founding myth of their very identity, and the god who had supposedly brought it about was enshrined by them as one who ruled supreme, omnipotent and alone. Nevertheless, that had not prevented large numbers of them from settling in the land of their former servitude, and in Alexandria particularly. There, they existed in highly ambivalent relation to their pagan neighbours: translating the Bible into Greek, but also periodically engaging in the mob violence for which the city was notorious. Indeed, so prone was Alexandria to sectarian rioting that on occasion even Caesars were obliged to intervene. ‘I urge you all, Jews and Greeks alike, to stop this ruinous and obstinate hatred you have for each other.’ So wrote the Emperor Claudius in AD 41, in a tone of evident exasperation.

To this combustible mix, the emergence of Christianity added a further element. The Church Fathers of Egypt were celebrated for the sophistication of their theology, and their followers — the Copts, as they would come to be called — for the histrionic quality of their devotion to Christ. The conversion of Constantine to Christianity, which for the first time placed Egypt under a ruler who disavowed the country’s traditional gods, spelt ultimate ruin for their cults. In 391, a mob of Christians stormed the great temple of Serapis. Its 750-year-old cult statue was hacked to pieces, its scrolls destroyed, and its various buildings either converted into churches or left as mouldering shells. Alexandria, once the intellectual powerhouse of paganism, was reconsecrated as something new: as ‘the most glorious and Christ-loving city of the Alexandrians’.

By the 6th century, when a shrine of Ra, the sun god, was closed down in an isolated Libyan oasis, the worship of Egypt’s ancient gods had been pushed into extinction.
Egyptian Christianity, meanwhile, had entered a dazzling golden age. Its tradition of inquiry into the nature of God was uniquely brilliant and searching. Its monks blazed a trail of asceticism that the entire Christian world would end up following. Its cataloguing of the books of the New Testament proved definitive. Simultaneously, though, its relish for theological controversy remained as swaggering as ever. The Bishop of Alexandria, with imperious immodesty, took to calling himself the ‘Judge of the Universe’ — but others, less flatteringly, labelled him ‘a new pharaoh’. Divisions about how the nature of Christ was properly to be defined split the Egyptian church, and set its leaders at loggerheads with Caesar himself. In September 642, when a warband of Arabs seized control of Alexandria from the Romans, one bishop had no doubt who was to blame for the disaster: it was, so he declared, God’s punishment for ‘the wickedness of the emperor, and his persecutions’.

If so, then He had exacted a high price indeed. The Arab conquerors, like the Jews and the Christians, looked back on Pharaoh as the very archetype of idolatry; but they also regarded the Bible itself as corrupted, and boasted of a scripture, the Quran, that constituted the seal of revelations. Islam, as it evolved over the last centuries of the first millennium AD, would not be lacking in an Egyptian flavour. The Quran itself contained palpable echoes of episodes from Coptic gospels, while the oldest surviving life of Muhammad, the prophet to whom it had supposedly been revealed, was written in Egypt. By the year 1,000, the country had become a veritable powerhouse of Islamic civilisation: home to stunning mosques, exquisite calligraphy, and an entire new capital, dazzling and puissant, by the name of Cairo. To this day, the great university founded there in 972, Al-Azhar, remains the most celebrated and influential in the entire Muslim world.

Few today, looking not just at Egypt but at the entire Middle East, would doubt the pressing relevance of this remarkable span of history. How timely it is, then, that the British Museum should have put on what is a quite brilliant exhibition to explicate it. Beginning with a head of Augustus and ending with a letter written by Maimonides, the 12th-century Jewish philosopher, it compresses an astonishingly complex process of change in a way that is simultaneously accessible and sophisticated. While there are few objects here with the immediate impact of, say, a colossal head of Ramesses II, the curators have taken full advantage of Egypt’s incomparable ability to preserve what in other climates would soon have rotted away. Everything from a child’s sock to a Coptic curtain is on display — with manuscripts enjoying particular pride of place. If you want to see the actual letter written by Claudius to the Alexandrians, or the oldest copy of the Nicene Creed in existence, or fragments of lost gospels fit to inspire the plot of a Dan Brown novel, then this exhibition is the one to visit.

Most fascinating of all, though, is the opportunity it provides to trace elements of continuity through a millennium’s worth of jolting change. The theme is established in the very first room, with two splendid statues of Horus — hawk’s head and all — dressed in Roman military uniform; but it continues throughout the show. We see an amulet with Anubis on one side and Gabriel on the other; a spell that invokes both Ra and Moses; a Coptic cross flanked by Cupids. To look on these is to feel both the aeons of time that constitute the sweep of Egyptian history, and how, at certain moments and places, they can seem to shrink almost to nothing.

Lady Duff-Gordon, writing from Cairo in the 19th century, once commented that ‘the Christianity and the Islam of this country are full of the ancient worship’. She was echoing, albeit unwittingly, the presumption articulated by the incantation written on the side of the coffin some 4,000 years ago: that the gods worshipped by Egyptians have always been implicit in Egypt’s beginnings. The fascination of this show is the degree to which it simultaneously undermines and supports such a conclusion. The questions that it raises — the degree to which monotheism is inherently intolerant, whether Christians and Muslims can co-exist in peace, and the relationship of theocracy to state power — are certainly not exclusive to the period that it covers. The last major exhibition that the British Museum will put on under the directorship of Neil MacGregor, Faith after the pharaohs is a worthy last hurrah: intelligent and fascinating, it constitutes a mirror held up to a crucial period of history, and to present circumstances as well.

Egypt: faith after the pharaohs is at the British Museum until 7 February 2016.

More Spectator for less. Subscribe and receive 12 issues delivered for just £12, with full web and app access. Join us now.