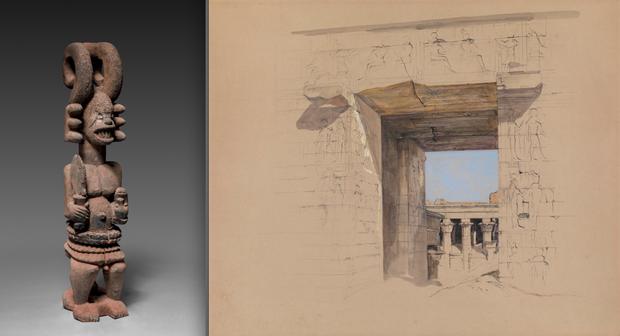 CLEVELAND, Ohio – The newest acquisitions at the Cleveland Museum of Art include a visually powerful example of Igbo art from Nigeria and a 19th-century watercolor sketch of an Egyptian temple that almost appears to be three-dimensional.

A detail of the Igbo sculpture recently acquired by the Cleveland Museum of Art.Cleveland Museum of Art
The Igbo figure, originating from one of the largest ethnic groups in southeast Nigeria, is an iconic example of its type, the museum said in a news release.
It depicts a man seated on a one-legged stool, holding a cutlass in one hand and a human skull turned upside down in the other.
Once part of a shrine, the sculpture represents a genre called ikenga, intended to receive prayers and sacrifices in return for support and guidance from ancestors.
The seated figure sports an elaborate headdress with curved horns like those of a ram, plus three projecting cone shapes on either side of the face.
The figure's forehead and temples are decorated with parallel incisions to imitate scarification patterns known locally as ichi, which show that the sculpture represents a high-ranking member of one of the many Igbo male associations and also emphasizes the prestige of the acquisition. 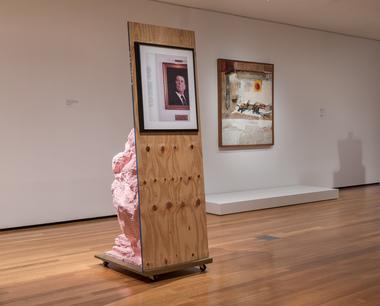 Hans Haacke with Sculpture, 2005. Rachel Harrison (American, 1966 - ). Wood, chicken wire, polystyrene, cement, acrylic, dolly, and pigmented inkjet print (Hans Haacke's oil painting, Homage a Marcel Broodthaers, 1982); 75 x 24 x 31 in. The Cleveland Museum of Art.David A. Brichford
The watercolor "The Temple of Edfu: The Door of the Pylon," was painted by John Frederick Lewis, the first English artist to spend an extended period of time in Egypt, living in Cairo from 1841 to 1850.
Lewis created the drawing by the museum during an expedition with his wife up the Nile toward the end of his Egyptian sojourn.
The drawing records a minimalist, but strikingly realistic view through a pylon outside a temple courtyard.
Lewis recorded the temple's famous hieroglyphic inscriptions, but what's most striking is that he used the tan color of the paper as an equivalent for the sand-colored stone blocks of the temple.
By painting the blue sky as seen through the temple pylon, Lewis created a striking illusion of three-dimensional depth, as if the sheet of paper were a window, not a flat, two-dimensional representation.
Other acquisitions include "Hans Haacke with Sculpture," a sculpture by contemporary artist Rachel Harrison now on view through Sunday in the exhibition "Gloria: Robert Rauschenberg & Rachel Harrison,"
The sculpture, structured around a plywood plank that stands 75 inches tall, incorporates a digital scan of a portrait of President Ronald Reagan painted by Haacke, an early leader of conceptual art,
The museum says that the sculpture, created for the 4th Berlin Biennale in 2004, shortly after President Reagan's death, "questions the legacy of politics and culture—and their intersection."

Zelan Tang, Yuanming Yuan (Pavilion for Nurturing Orchids, Garden of Extended Spring), 2004, printed 2015. Lois Conner (American (1951 - ). Inkjet print, AP, triptych; image (each) 23 x 180 in. The Cleveland Museum of Art.Cleveland Museum of Art
The museum also received a gift from photographer Lois Conner, consisting of a triptych of black-and-white photographs of water lilies she made in 2004 at the Garden of Perfect Brightness in Beijing, an 18th century imperial Chinese garden destroyed by British and French troops during the Second Opium War.
Conner's panoramic photographs, which stand two feet high and 15 feet across, was donated by the artist in memory of the late Mark Schwartz, her friend and a museum trustee who died in 2014.