Every two months, the Nile Scribes bring you summaries of the latest research and discoveries in Egyptology, both from the field and the archives. We introduce you to the newest archaeological finds or rediscovered artefacts from museum collections, plus other new theories stirring in the Egyptological Zeitgeist.

With 2020 in full swing, there have been several announcements of discoveries already, ranging from a communal tombs for priests, to the discovery of Ptolemaic blocks at Sohag. Look also at the bottom of the blog for a special mention regarding the continued hype around the tomb of Tutankhamun and the search for Nefertiti.

The Egyptian Ministry of Tourism and Antiquities publishes a helpful round-up of recent discoveries, events, and projects in Egypt in an accessible PDF format. The latest issue was published in January 2020 (click here for English or Arabic). 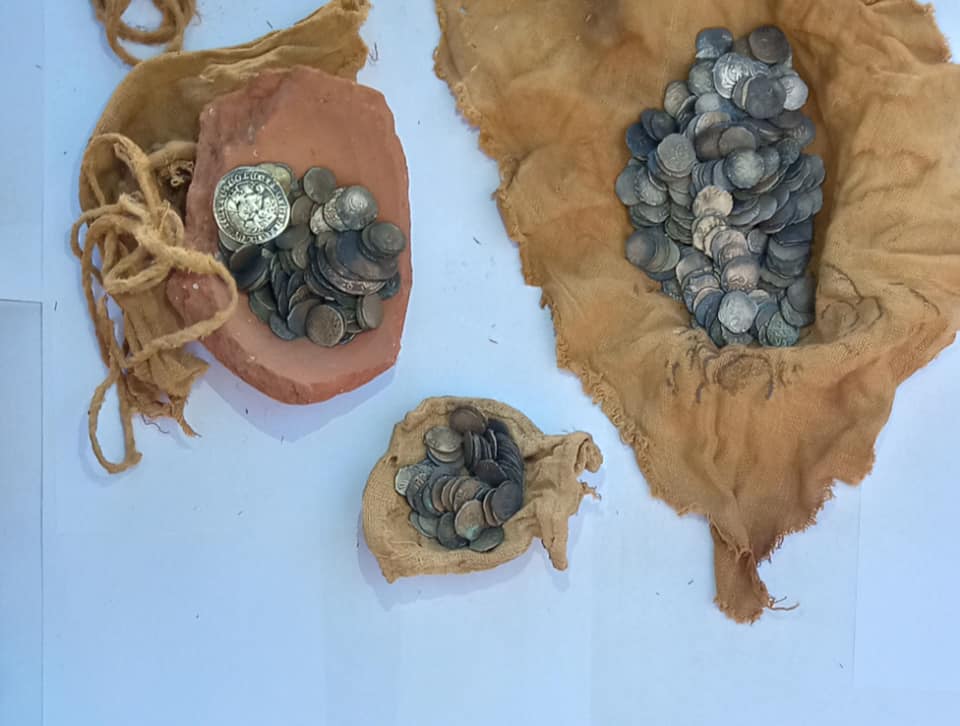 "370 ancient coins were uncovered in the monastery of Saint Fana in Minya governorate. Head of Islamic, Coptic and Jewish antiquities sector Gamal Mostafa announced that 341 coins are dating back to the Islamic era and 29 coins are dating back to the Roman era. The Monastery of Saint Fana is a Coptic Orthodox monastery, located in Minya Governorate about 300 km south of Cairo, northwest of Hermopolis around 2 kilometres (1.2 mi) from the village of Qasr Hur and east of the village of Beni Khaled. It is named after Saint Fana, also known as Bane (c. 354–395), Coptic Christian hermit. The monastery is sometimes called the Monastery of Abu Fanah and is also known as the Monastery of the Cross, due to the presence of many beautifully decorated crosses inside its church." 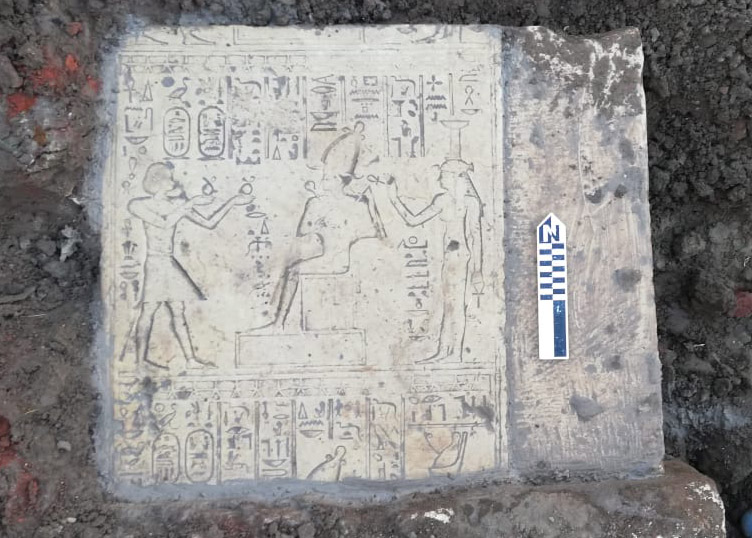 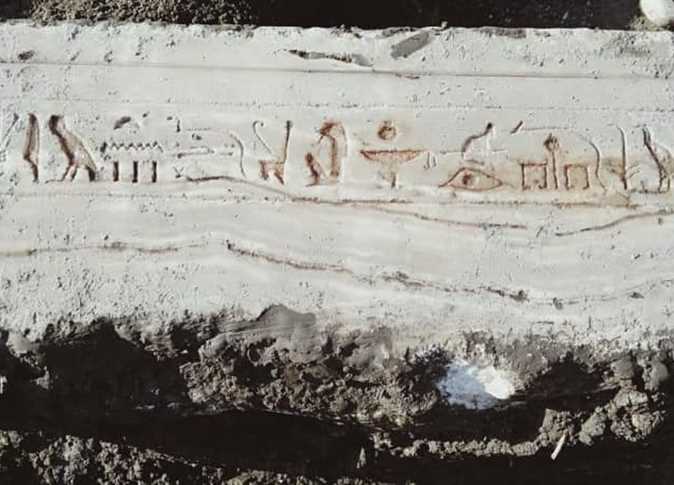 "Workers on a sanitation project in Dandit village, located in Egypt's Daqahlia Governorate, discovered on Monday large blocks of stone with what appear to be inscriptions in the hieroglyphic language. The company responsible for work on the project immediately reported the discovery to Mit Ghamr police station. Police moved to the site where the workers were digging, which is near the cemetery of the village, and found large blocks of stone with Pharaonic-like inscriptions and symbols, at a depth of about 4 to 15 meters." 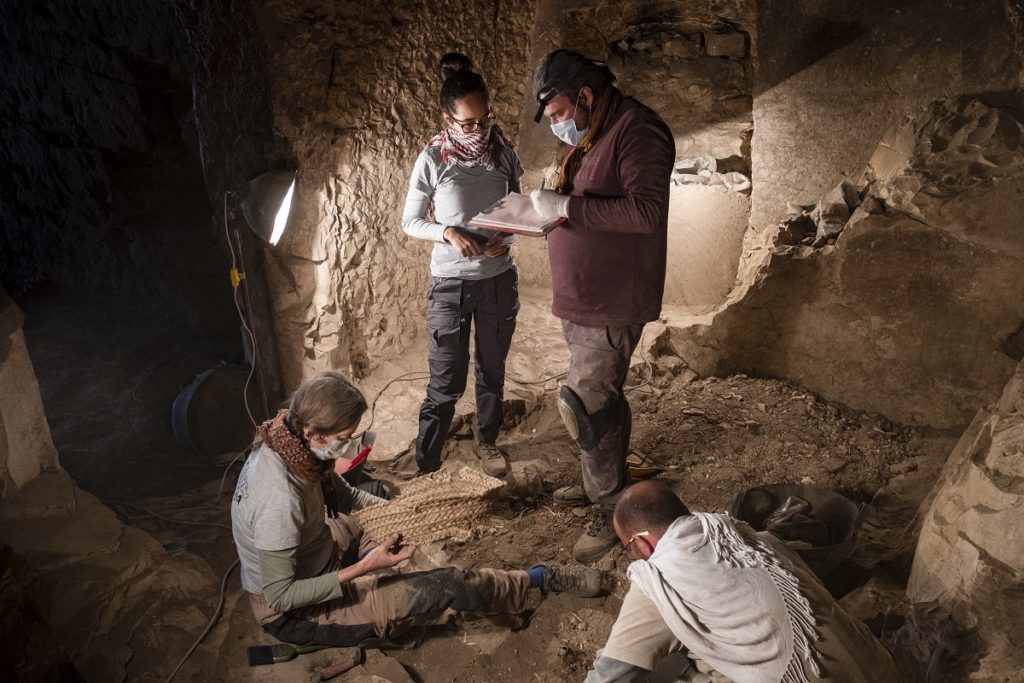 "The fifth phase of the Brazilian archeological mission in Egypt led by José Roberto Pellini, a professor at the Federal University of Minas Gerais (UFMG) started in early December 2019 and will finish on January 25, and has already made a discover in the Theban tomb 123 (TT123) at the Theban Necropolis in Luxor. An unheard-of 1.5-meter-deep well was found inside the tomb and is likely to lead to a burial chamber with several materials. "Our focus this year was digging into the so-called Statue Room. It's the innermost point inside the tomb and held the statues of the tomb's owner, Amenemhat, and his wife Enuit. As we started cleaning that room, we discovered a large well and started digging it until we found a new chamber under it; now we have a well dug into the stone at the Statue Room floor. It's approximately 1.5 meter deep and we found a room dug into the rock that may have held Amenemhat's sarcophagus," Pellini from Luxor told ANBA."

"The archaeological mission of the Ministry of Tourism and Antiquities has finished documenting a colorful antique inscription dating back to about 10,000 years BC found in an archaeological cave located roughly 60km southeast of Serabit al-Khadem, and 30km north of Saint Catherine, as part of a project documenting rock inscriptions in South Sinai. The Secretary-General of the Supreme Council of Antiquities Mostafa al-Waziry explained that the cave was located in a difficult region called al-Zaranij. The sandstone cave is at a depth of about three meters, 3.5 meters tall, and 22 meters wide, and is the first of its kind to be discovered in South Sinai. It was found by chance, upon notification from a desert adventurer in South Sinai." 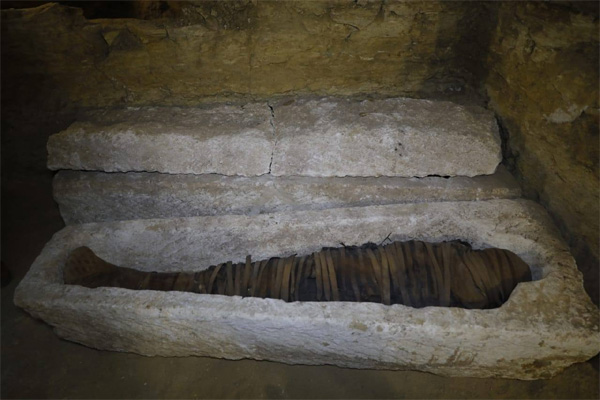 "The communal tombs were dedicated to high priests of the god Djehuty and senior officials in the fifteenth nome of Upper Egypt and its capital, Ashmunin. Minister El-Enany said that since 2018, several discoveries have been made in Minya governorate, including a cachette of mummies, as well as several tombs full of sarcophagi and funerary collections including jewelleries, ushabti figurines and funerary masks. "Minya is set to be put on Egypt's tourists map for its distinguished archaeological sites," El-Enany said."

"An Egyptian archaeological mission affiliated with the Supreme Council of Antiquities announced on Wednesday the discovery of 83 graves during archaeological excavations in the Om El-Khelgan region in Egypt's Daqahliya governorate in the Nile Delta. The secretary-general of the Supreme Council of Antiquities Mostafa Waziri said the graves date back to the first half of the fourth millennium BC, which is known as the Buto era. Waziri stressed that this is the first time that clay coffins dating back to the third Naqada period have been discovered in Daqahliya governorate, as they had only previously been discovered by a Polish mission in Farkha hill." 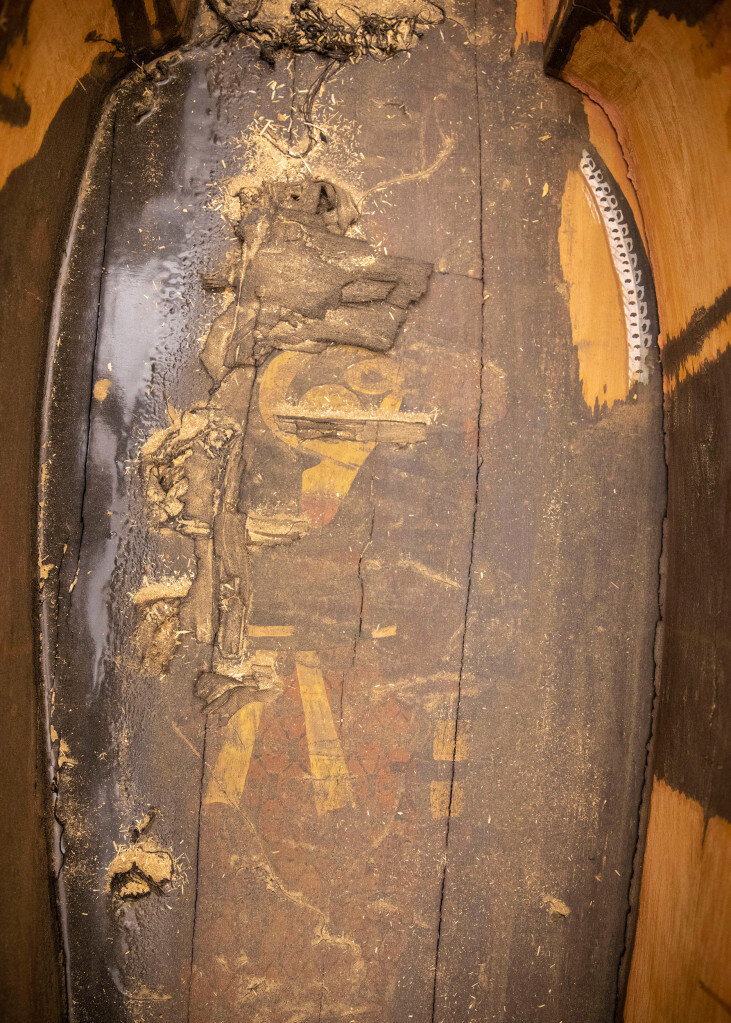 "The find was a highlight of a week-long research project led by Manuelian and financed by a grant from the Dean's Competitive Fund for Promising Scholarship. The goal was to create a complete digital visual record of Ankh-khonsu's coffin, along with two others, which then can be shared with students, researchers, museum visitors, and other enthusiasts. It's also part of a push by the museum to find ways to allow greater access to its collection of antiquities. The body of Ankh-khonsu had been removed more than 100 years ago when the coffin was brought from Egypt to Cambridge, and the container was reopened about 30 years ago. But for reasons unknown, "there was no modern documentation of the coffin's interior, so we had no idea what to expect, plain wood or an exquisitely painted deity staring back at us," said Manuelian. "It turned out to be the latter, hiding somewhat beneath a layer of resinous material used in the funeral process." 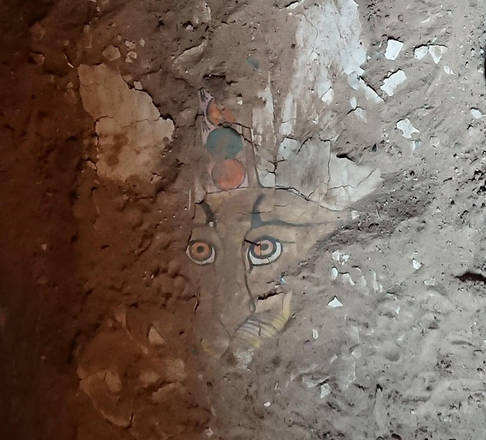 "This necropolis is where the residents of Aswan were buried between the 7th century B.C. and the 3rd century A.D. One of the tombs, number AGH026, already made news last year when a large room was found with about 30 bodies buried between the 2nd century B.C. The bodies were accompanied by many objects, including stuccoed body covers painted with gold, a funerary bed, parts of sarcophagi, a stretcher for the mummies, and lots of pottery vessels. This is where the team found the painted leopard, a symbol of strength that was placed by the head of the deceased person to offer protection during the journey to the afterlife. Piacentini told ANSA that although the leopard is a frequent symbol in Egypt, "it is very rare to find it painted."

The tomb of Tutankhamun and the possibility of a new chamber hidden behind his burial chamber continue to make it into the news. We are including this as a potential "discovery" although it is waiting to be confirmed in due course:

"A radar survey around the tomb of Tutankhamun in Egypt's Valley of the Kings has revealed possible evidence of further hidden chambers behind its walls. The findings — in an unpublished report, details of which have been seen by Nature — resurrect a controversial theory that the young king's burial place hides the existence of a larger tomb, which could contain the mysterious Egyptian queen Nefertiti. Researchers led by archaeologist Mamdouh Eldamaty, a former Egyptian minister of antiquities, used ground-penetrating radar (GPR) to scan the area immediately around Tutankhamun's tomb. They report that they have identified a previously unknown corridor-like space a few metres from the burial chamber (see 'Chamber of secrets'). Their finding was presented to Egypt's Supreme Council of Antiquities (SCA) earlier this month. The data are "tremendously exciting", says Ray Johnson, an Egyptologist at the University of Chicago's Oriental Institute in Luxor, Egypt, who wasn't involved in the research. "Clearly there is something on the other side of the north wall of the burial chamber."