Object Biography #24: An erased stela of Tutankhamun(?) | Egypt at the Manchester Museum

This unobtrusive limestone stela (Acc. no. 2938) was found by Egyptian workmen employed by Blackburn-born Egyptologist John Garstang (1876-1956) at the sacred site of Abydos. Like many other monuments set up there over the centuries, it might be assumed simply to be a tribute to the local god, Osiris, but the iconography and composition of the scene is unusual. Although found broken, and with clear evidence of erasure to the identifying inscription, is one of the most intriguing – but little-known – pieces in Manchester's collection. 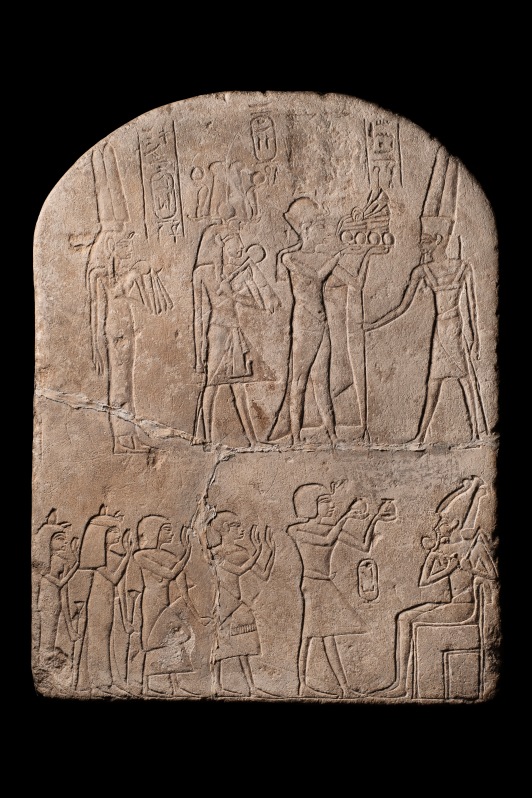 To begin with the lower register; this shows the expected figure of Osiris, seated at the right, with five figures approaching him – four of them uncaptioned and therefore unidentified. These consist of two women and two men, each of apparently elite status and in the pose of adoration – in keeping iconographically with depictions of kinship groups on many late New Kingdom stelae. However, the group is led by a royal male figure identified as 'Djeserkare' – the revered king Amenhotep I. This is unusual, as the overall iconography of the piece dates to very late Dynasty 18  – long after Amenhotep I had died. Usually, posthumous depictions of this deified king show him as passive and in receipt of offerings; it is also uncommon to find a king (let alone a deified king) leading – and in some sense in the same sphere as – a group of apparently non-royal people. 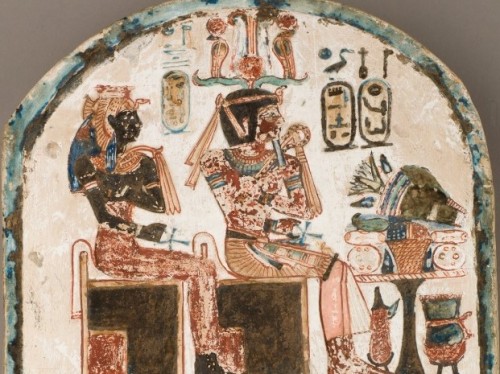 Detail of the stela of the sculptor Qen, showing the deified Queen Ahmose-Nefertari and King Amenhotep I. MMA 51.93

The upper register is even more intriguing. It shows three royal figures approaching Amun-Re, who is captioned with his name and the epithet 'Lord of the Sky, Ruler of Thebes'. He is accompanied on this top register by the standing figures of (from left to right) the deified Queen Ahmose-Nefertari, the 'Lord of the Two Lands' Nebpehtyre (= Ahmose I), and an active (i.e. living/reigning) king, whose name has been erased. The stela thus shows no fewer than three historical royal figures – reflecting an awareness of history at Abydos that is echoed in another Abydos monument (possibly a statue base) naming several kings also in Manchester. In addition to being regarded as a founder of the New Kingdom, Ahmose I is well-known as a builder at Abydos – while Amenhotep I and his mother Ahmose-Nefetari were venerated at the Theban workers town of Deir el-Medina. 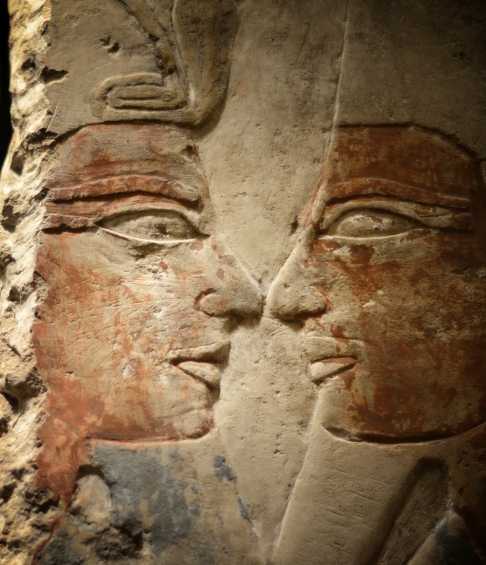 Ahmose I(?) embraces Osiris. Detail of a block from his Abydos complex. Manchester Museum 3303

The style of the figures, and the offering Pharaoh in particular, have a distinctly Amarna feel – but given the scene shows the worship of Amun, it can hardly show Akhenaten or his immediate successor(s). Tutankhamun is a strong possibility, perhaps a way of reasserting the dominance of Amun even at Abydos and reconnecting with the orthodoxy symbolised by older rulers. Certainly, Tutankhamun's name was erased after his death because of his association with the Amarna interlude. His short-lived successor Aye may also be considered for the same reason. Horemheb and Ramesses I are also a less-likely possibility, as it is not clear why their names would have been subsequently removed.

It is perhaps ironic that the pharaoh who commissioned the stela to show his connection with great kings of the past should have been so conspicuously forgotten.

The stela will appear with several other objects from Manchester Museum in the exhibition 'Toutankhamon. À la découverte du pharaon oublié', in Liége in Belgium between December 2019 and July 2020.

The exhibition 'Tutankhamun: Treasures of the Golden Pharaoh' opens at the Saatchi Gallery, London, on Saturday 2nd November.