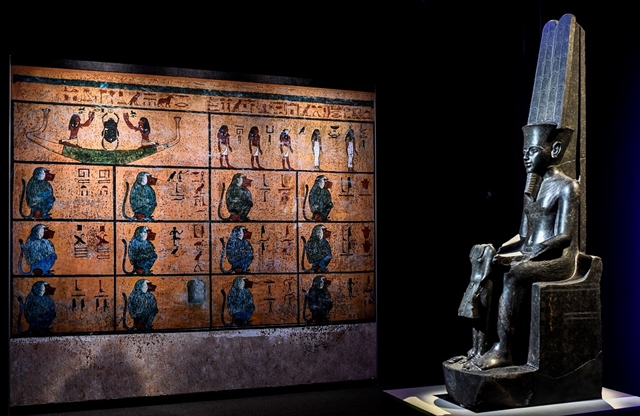 A sculpture of ancient Egyptian deity Amun is displayed during the exhibition 'Tutankhamun,Treasures of the Golden Pharaoh". More than 1.2 million visitors are expected to flock to the exhibition by the time it wraps up in Paris. — AFP Photo

PARIS — A blockbuster Tutankhamun show in Paris has been extended for a week with more than 800,000 people already buying tickets for the exhibition.

More than 1.2 million are expected to flock to Tutankhamun: Treasures of the Golden Pharaoh, which has been described as as a "once in a generation" show about the young Egyptian monarch.

Organisers said opening hours have also been extended from 9am to 9pm at the giant la Villette venue in the north of the French capital.

The galleries will remain open until 2am on June 15 for The Night of Tutankhamun, which will feature traditional musicians and guest speakers.

The show, which will transfer to the Saatchi Gallery in London in November, will now run in Paris until September 22.

The Egyptian Ministry for Antiquities – which is taking a share of the proceeds of the show – said this is the largest number of Tutankhamun artefacts ever to have left Cairo.

Almost all of the 3,400 exhibits come from the Egyptian Museum in Cairo's Tahrir Square, and are never likely to leave the country again.

The Louvre in Paris has also loaned one of its top Tutankhamun pieces to the show, a statue of Amon, the king of the gods, protecting the pharaoh. — AFP