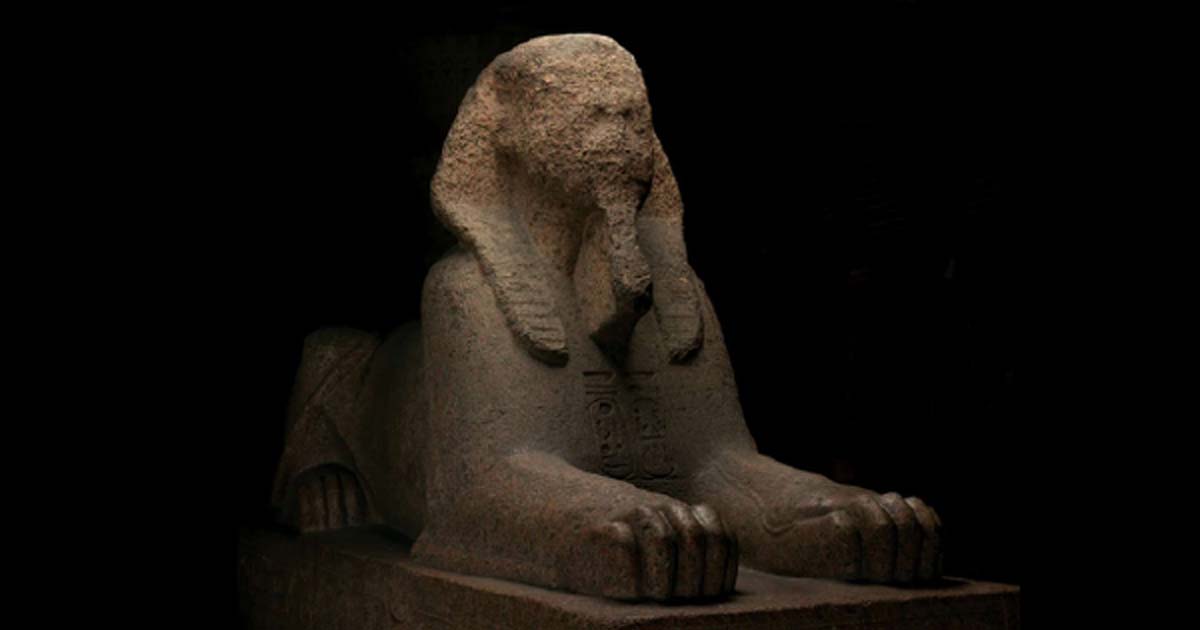 In 1913, archaeologists working with the Egyptian Antiquities Service, the Egypt Exploration Fund and the British School of Archaeology, excavated an enormous red-granite sphinx representing the divine power of pharaoh Ramses II from the Temple of the God Ptah at Memphis, Egypt and sailed it to the U.S. Now, it's been moved again.

For the last century the massive sphinx has been located in the Egypt Gallery at Penn Museum in Philadelphia. But on Tuesday this week (June 12), the 3,000 years old sphinx weighing nearly 13 tons (11.8 metric tons) was relocated in what Live Science call "a monumental move." 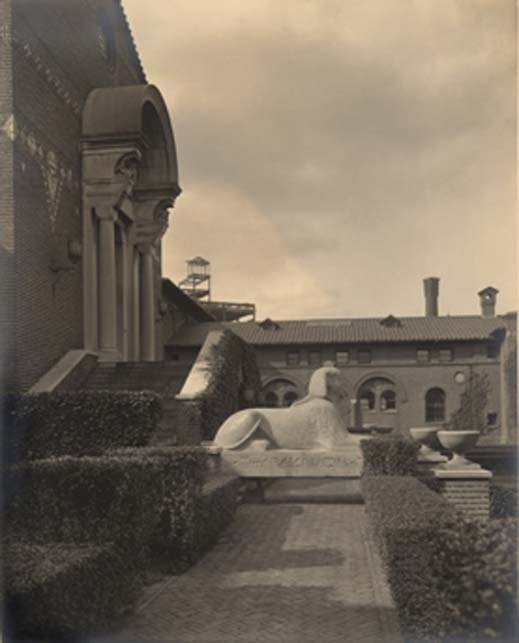 The Sphinx rested in the Penn Museum courtyard for three years from 1913-1916. This 1915 photo was taken by Charles Sheeler. Image: Penn Museum Archives. ( Penn Museum )

Back To The Future Levitation Technologies

According to staff at Penn Museum the colossal statue "floated" on high technology devices called "air dollies" which adopt "high-powered air compression in a manner similar to hoverboards," just like we saw Marty McFly scooting about on in Back to the Future and air hockey tables.

Moving from the cool shade of the Penn Museum Egypt Gallery, the ancient sphinx's new location is in the museum's main entrance hall, where the part human part lion ancient statue will be stroked with daylight for "the first time since it arrived at the museum nearly a century ago," according to spokespeople from the museum. 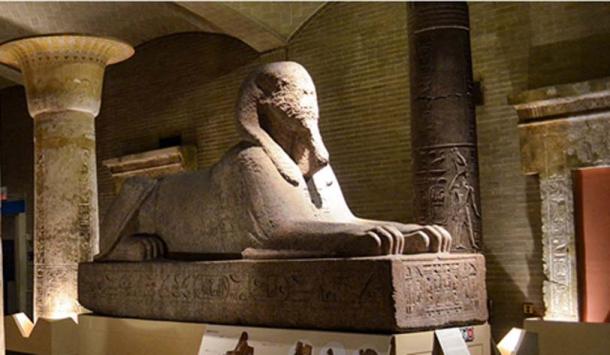 In 1913, the sphinx was transported almost 6000 miles from Memphis in Egypt to Philadelphia in the USA and it's been in the Egypt Gallery since 1926. This new move was a mere 250 feet (76 meters) but museum representatives reported that the project "posed unique challenges." This diagram depicts the route the sphinx traveled to its new home in Penn Museum's main entrance hall. 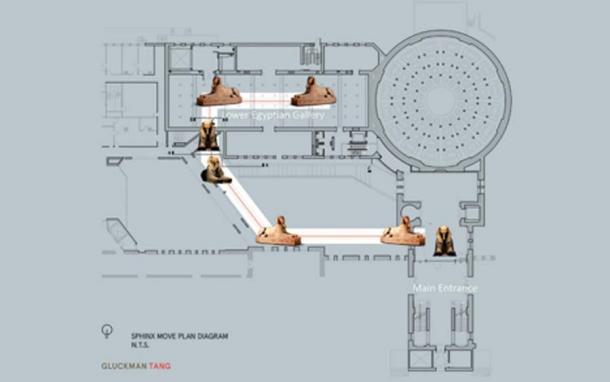 The 76 meter course the sphinx travelled to its new location in the main entrance hall. ( Penn Museum )

A question that was asked often in ancient times was repeated by the museum's team, "How on Earth will we move such an enormous object?" Like ancient Egyptian surveyors, the entire site required testing for its overall strength and infrastructural capacity to support the weight of the stone. But this requires knowing an approximate weight of the stone and this is where Penn staff had a great advantage over their Egyptian forebears as they "3D-scanned the sphinx, to calculate its weight and density." 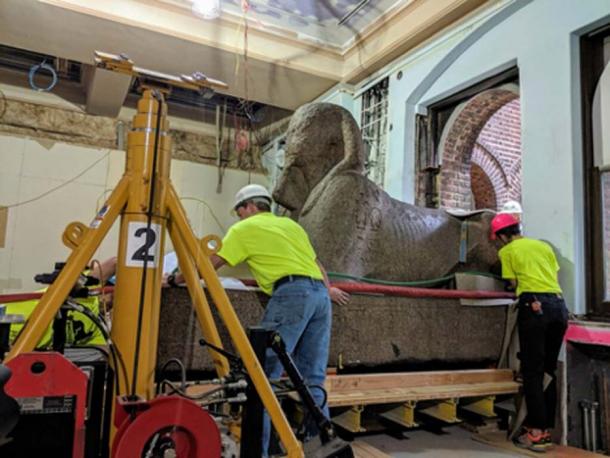 The sphinx floating into the main entrance hall. ( Penn Museum )

According to an article in the Philadelphia Enquirer , the next step was to bring in transport engineers who determined how best to safely move the stone and they decided the best method was to use "hydraulic gantries" placed on four air dollies. This would effectively "float" the sphinx.

This operation took months in planning and preparation, weeks to set up and some 5 hours to actually complete the 76 meter distance. Of course, due precautions were needed to ensure there was no damage to this giant piece of antiquity, but the scale of this operation gives some idea of the efforts and planning that would have been involved in creating and installing the many magnificent items of grandeur of the ancient kingdom in the first place.

The behemoth was then swung around into a nearby scaffolding frame where the hydraulic gantries hoisted the massive statue onto a track, upon which it was "nudged" across a courtyard then through a window, with only "inches to spare". The process

The operation was overviewed by Julian Siggers, Williams Director of the Penn Museum, who admitted in a Penn Today article that he was "nervous about the move" but had "confidence in the operation." He claims that "The sphinx will almost be Penn's public face to the city. It is going to be one of the things Penn will be most proud of, because there is no other university museum like this anywhere in the country." 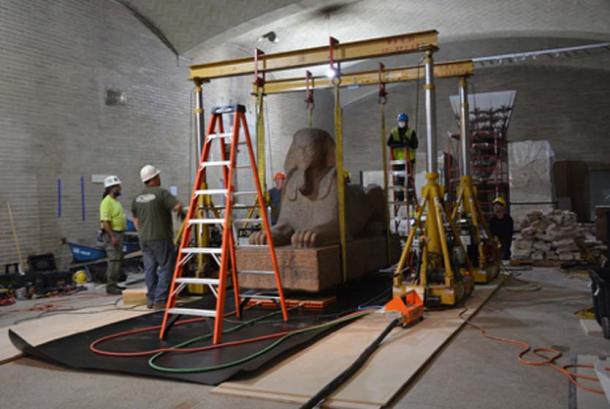 The sphinx hovers on orange air dollies that were essential to the move. ( Penn Museum )

He is right about that, there is no other museum in the US with an artifact as unique as this one, and according to Julian Siggers the new location was carefully chosen:

"The sphinx will be the first object you see as you enter. It is our most iconic object, but it is also standing in as a representation for the complete transformation of the museum."