Directly opposite the town of Edfu, the Wadi Abbad enters the Eastern Desert. This ancient route was once a main artery from the classical town of Contra Apollinopolis (modern Edfu) to the important Graeco-Roman emporium of Berenike (near modern Marsa Alam), which is now a deserted port on the Red Sea coast, named by Ptolemy II  after his mother, Queen Berenike. But the Edfu to Red Sea route was also used by gold miners from the earliest times – the mines are said to be one of the major sources of wealth for Egyptian rulers since the Early Dynastic Period just as gold continued to be highly prized by their successors.

As the desert hills begin to rise out of the open landscape of Wadi Abbad, the modern tarmac road takes a turn into Wadi Kanais at around 50km from the Nile and from the village of el-Ridisya after which Kanais is often mistakenly named. First mentioned by Cailliaud, an explorer who visited the area in 1816, el-Kanais, ('the chapel') is the site of a rock-cut speos built by Seti I that was cut into the high cliff-face. It is also the site of an old watering station and a small well-preserved Roman fort.

The portico of the temple was built against the cliff as an entrance to the speos. The front of the portico is open and there are four decorated columns with lotus bud capitals that support the architraves and the roof of stone slabs that was also decorated. Another square pillar was added in Graeco-Roman times to hold up a broken architrave. The reliefs in the portico show Seti I before Amun-re and before Horus of Edfu. The King can be seen in a smiting pose in a large relief on the east wall, holding the hair of his Nubian captives while Amun-re holds out a sceptre before him and the scene is repeated with Horus on the west wall. In other scenes Seti is making offerings to Amun-re and the falcon-headed Horus. The walls and architraves are covered in hieroglyphs and cartouches of the King and there is still some good colour remaining on some of the painted reliefs. 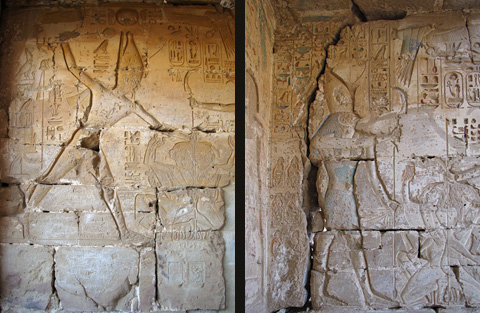 The inner parts of the temple have received a great deal of attention and study in the past. There is a main hall with four square pillars, three shrines set against the back wall and two niches set into the side walls at the back. It is in the entrance of this hall that Seti's long inscription tells the story of the building of his monument. A text dated to Year 9 of Seti's reign reveals how the king stopped here while making an inspection of his gold mines, from where the gold to furnish his Abydos temple was acquired. His journey had been long and arduous in the heat of the desert and the king decreed that a well be dug to quench the thirst of all desert travellers and for the gold-miners who must pass this way and a shrine that they may praise the gods and the king. 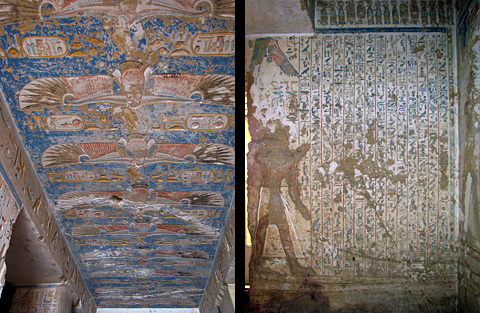 The second part of the text inside the speos is devoted to blessings on those who look after the shrine and the mines with which it is associated, and threatens those who allow it to fall into neglect with curses. A third inscription was intended to echo the dialogue of travellers who have benefited by the king's benevolence. Seti's Kanais temple was dedicated to Amun-re, whom Seti identified with Min and to Re-Horakhty the sun-god who he identified with Horus of Edfu and to the deified Seti himself. Other deities depicted in the hall include Ptah and Sekhmet, Osiris and Isis, Mut and Khons, and Nekhbet, goddess of the region. Before these gods, Seti is depicted offering incense, wine, flowers and food. The seven main deities honoured here are the same gods who have shrines at Seti's Abydos temple. The temple can also be seen to have an important focus on the royal cult, like his Abydos temple where the deified Seti is also prominent in reliefs.

Another unusual aspect of Seti's Kanais temple, unlike his other monuments, is that it is decorated in sunk relief throughout, rather than the more common convention at that time, of sunk relief on the exterior (to catch the light) and raised relief on the interior walls. The King made another journey to Kanais once the well and temple were completed in order to dedicate the monument.

Near the temple, high on the cliffs there is a stele of two men, Anena and Nebseny. Anena was a troop commander who oversaw the transport of gold and Nebseny, a ship's crewman, claims to have been charged with excavating the well of Seti-Merenptah. Another stele was carved by Yuni, a newly appointed Viceroy of Kush, while yet another nearby stele was made by Panub, 'Stablemaster of Amun' and 'Leader of Troops'. Panub's stele is divided into two registers. At the top, Seti offers nw-pots to six gods: Amun-re, Mut, Re-Horahkty, Osiris, Isis and Horus as a falcon, the same set again as those in Abydos temple. On the bottom register Panub, kneels in adoration of an un-named goddess (Astarte?), who is mounted on a galloping horse brandishing a shield and spear. In the text Panub praises a series of deities including the King. 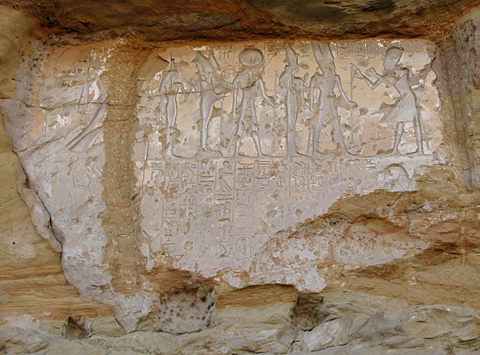 All around Seti's Kanais shrine there are petroglyphs and graffiti left by ancient (and more modern) travellers who passed this way and perhaps sheltered from the sun beneath the overhanging rocks. The more ancient petroglyphs can be found to the east of the temple, high on a cliff face and on two large boulders in front of the cliff. Here, on a large rock, numerous boats of various types have been hammered and bruised into the surface of the boulder.

The bluff is covered by ancient graffiti from Pharaonic times onwards and hieroglyphic, demotic, Greek and Arabic texts can be seen once the eyes become accustomed to the shadows. There are a great many depictions of different shaped boats, some with human figures inside or near them, though it is not always easy to guess at the age of these carvings. Some of the boats are simple curved shapes, some have multiple oars and some have a cabin on the deck.

There are also many pictures of hunting scenes showing men and animals, including long-horned gazelles, and ibix. There are several images of elephants and also different types of birds, including ostriches. These carvings also vary greatly from schematic or stylized outlines to more fully-formed artistic representations.

The Ptolemaic kings particularly, employed elephants in their fighting divisions for many of their battles, captured and imported from further south in Africa in special ships called elephantagoi and taken to the Nile through the desert from the port at Berenike. 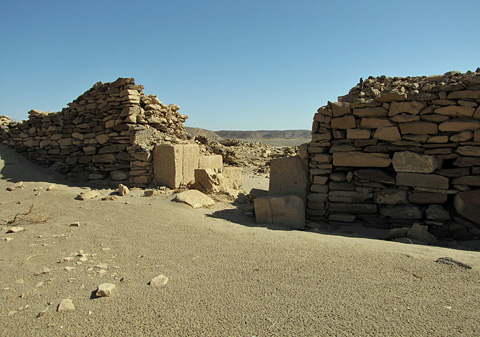 In front of the temple, there is a Roman fortified water station, consisting of the lower parts of an enclosure wall in which a few chambers can still be seen. The entrance is on the western side and inside the enclosure the sandy ground is strewn with pottery sherds. A large cistern can be seen in front of the fortress that would have stored a supply of water for the use of travellers.

How to get there

The Wadi Abbad is reached from the east side of the bridge at Edfu where there is a police checkpoint at the entrance to the desert road to Marsa Alam. At around 50km towards the coast, the Speos of Seti I can be seen on the right-hand side of the road, across a wide stretch of sand under the cliff. There is a gafir's hut near the temple. Special permission may be required to visit this site.

Introduction to the Eastern DesertIn "Deserts"