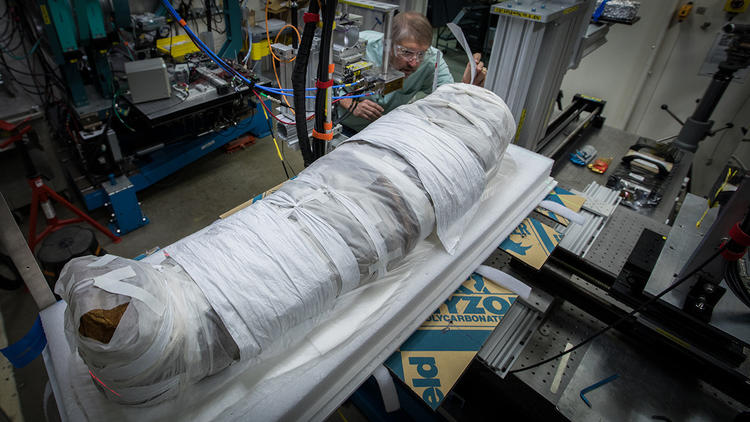 Inside a sprawling research building at Argonne National Laboratory, a collection of scientists, researchers and art curators assembled Monday to unravel the mysteries of a mummy.

The ancient Roman-Egyptian linen-wrapped remains of a 5-year-old girl, including an embedded portrait, were unearthed in Hawara, Egypt, in 1911. The mummy, about 1,800 years old and weighing 50 pounds, is from the collection of Garrett-Evangelical Theological Seminary on the Northwestern University campus. Northwestern researchers have been piecing together her story.

That's how the mummy ended up inside the thick steel doors of the research hutch at Argonne, where the high-energy, brilliant and penetrating X-ray beams from the Advanced Photon Source synchrotron will be able to provide unprecedented details about her components.

The high-powered beams of the Argonne machine will give researchers molecular information about what is inside the mummy, including the girl's bones, burial materials and what has become of her remains. The powerful synchrotron allows scientists a noninvasive way of probing the mummy, offering snapshots of its contents at a near-atomic level.

"That's what we're trying to do with all this analysis, to unpack who this person was," said Marc Walton, a Northwestern materials science and engineering research professor who has been extensively studying the mummy. "We're trying to construct the narrative."

This is the first time the advanced technology was used on a mummy, according to Argonne. The synchrotron, which is about 1 kilometer around, allows for the study of the arrangement of molecules and atoms. It has been used in pharmaceutical research, including the development of a drug used to stop the progression of HIV into AIDS and to study a bone of Sue, the famed dinosaur at the Field Museum.

"This will tell us about the history of the mummy and also tell us some things about its conservation," said Stuart Stock, a cell and molecular biology research professor at Northwestern University's Feinberg School of Medicine who helped lead the experiment at Argonne, which is near Lemont. "We really hope this will open a new chapter in how we study these objects."

Northwestern researchers want to learn more about how the girl died and how she was prepared after death. Stock said researchers are particularly interested in the ceramic-like material that is inside of the girl's intact skull.

The mummy was examined for more than 15 hours, with researchers monitoring the results of the synchrotron overnight. Early results, Stock said, showed the material inside the skull did not appear to be crystalline. Stock was also able to detect wires embedded in the mummy and the enamel and bone of the teeth. The girl's bones looked as expected, he said.

"We can't do this with any other technique," Walton said. "We're really pioneering new methods of looking at the intact objects without having to take an actual sample of them."

Researchers have not been given permission to take samples from the mummy, but they also want to preserve her for future examinations.

The mummy traveled to Argonne in a heavy wooden crate, accompanied by form-fitting padding and protective straps. She was placed inside the radiation enclosure of the research room, where the 1/110th-of-an-inch beam, which Stock describes as a "pencil beam," penetrated the materials of the mummy. Stock and Jonathan Almer, a lab technician at Argonne, then looked at the readout from the X-ray detector to examine the structure of the defraction patterns — the fingerprint of the material hit by the X-ray beam.

By studying the linen wrappings, the skeleton, other matter inside the wrapping and the external portrait, researchers can try to determine what materials were used and where they came from. Identifying and tracing the materials shines light on the culture, trade networks and commerce in the Roman Empire of the late first and early second centuries.

In August, the mummy underwent a CT scan at Northwestern Memorial Hospital. The scan enabled researchers to confirm the mummy girl was about 5 years old, giving researchers a preliminary understanding of the mummy's composition and structure. It also pinpointed specific areas to be studied further with the help of the Argonne equipment.

And because child mummies are unusual, researchers also are hoping the new examination will reveal more about why the girl may have been preserved in such a manner.

The mummy is one of about 100 worldwide with a painted portrait embedded in the wrapping above where the head would be, a style introduced by the Romans. The analysis also will provide clues about Roman-Egyptian mummy portraits, a style that differs from the more familiar Egyptian mummies, which featured three-dimensional sculpture-style faces in an idealized form.

"She's really quite rare," said Essi Ronkko, a curatorial associate at the Block Museum of Art at Northwestern. "You don't get to study a mummy like this often. This is invaluable because it's a fully intact mummy."

Ronkko said she stumbled on the presence of the mummy at the Styberg Library reference room when researching the art museum's upcoming exhibit on mummy portraits. She worked with others at the university to incorporate her into the exhibit and helped launch additional research with Walton, Stock and Taco Terpstra, assistant professor of classics and history.

The mummy is often referred to as the Hibbard mummy and also as Hawara Portrait Mummy No. 4. The mummy made its way to Evanston after it was given to Lydia Beekman Hibbard as a gift for providing financial support to archaeologist Flinders Petrie's excavations in a Roman cemetery in Hawara. She donated the mummy a year later to what was then Western Theological Seminary of Chicago.

Affixing the mummies with a portrait "is a decidedly Roman phenomenon," Walton said. "So being able to study one and find out more about how it was made and used in the Roman period is very important."

Walton and Terpstra taught an interdisciplinary course, "Materials Science and Socioeconomics of Portrait Mummies from Ancient Fayum," in which students researched the mummy's discovery and how it made its way to Evanston. They also analyzed the mummy's materials, examined the portrait for clues about how and why it was made and studied the techniques used to compose the portrait.

The portraits are lifelike depictions of a person's face, but researchers have questions about what exactly they were meant to represent. In the case of the mummy girl, the accompanying portrait appears to be of an older girl or young woman. Walton and Terpstra offer possible theories: that it was a depiction of her mother or aunt, that it was a painting selected at random, or that it was meant to represent what the family envisioned the young girl looking like if she would have grown older.

Researchers do not know how the girl died, but since there were no signs of trauma on the remains, it appears she likely perished from disease. Terpstra said the three most likely culprits would have been malaria, tuberculosis and smallpox, which had just appeared during the second century. He ruled out leprosy, which would have shown up on the skeleton, he said. Life expectancy at the time was about 25 years, Terpstra said, and only about half of all children made it to age 10.

Researchers believe the girl was wrapped naked in the linen and was probably not wearing a dress when she was prepared for mummification.

The mummy will be included in an upcoming art exhibit "Paint the Eyes Softer: Mummy Portraits From Roman Egypt" at the university's Block Museum of Art. The exhibit, which is free to the public, begins Jan. 13 and runs through April 22. Student research will be included in the exhibition.

The exhibition will present Roman-Egyptian mummy portraits and related artifacts from the site of ancient Tebtunis in Egypt, near Hawara. Most of the objects in the exhibition are on loan from the Phoebe A. Hearst Museum of Anthropology at the University of California, Berkeley, which holds one of the largest collections of mummy portraits from a single site in the world. The Hibbard mummy will complement the other portraits and objects and help provide context for the exhibition.

The mummy portraits "look like us," said Lisa Corrin, director of the Block Museum of Art.

"When we see them, they look like people that we know," Corrin said. The portraits also "remind us of our own mortality."

"They have such potency," she said.

"This is material proof of how far-flung the empire was," Corrin said.

The interdisciplinary research of the mummy, she said, also helps tie together the worlds of art, science and history.