The Egyptian sculptor Adam Henein has died in Cairo at the age of 91.

Henein was a prominent figure in the country's Modernist movement, sculpting bronze, wood, clay, and granite into clean, sinuous forms. The heft of his works recall the solidity of ancient Egyptian sculpture.

Henein was born in Cairo in 1929 to a family of metalworkers from Asyut, and began making art from a young age. He visited Egypt's Museum of Egyptian Antiquities at the age of eight, which he would later recall as a formative moment.

In the 1960s, he made a series of sculptures of animals, such as roosters, cats, dogs, goats, owls and donkeys, in reference to ancient statuary. Modern Egyptian culture was equally important: the early 20th-century sculptor Mahmoud Mokhtar was an influence, as was the artistry and image of Umm Kulthum. 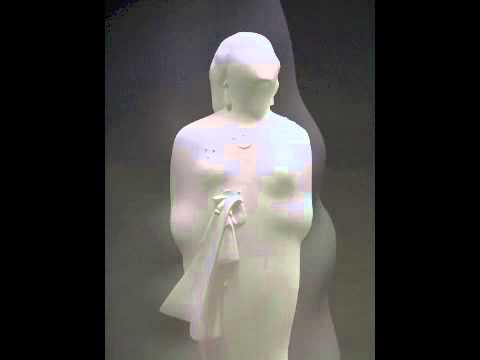 In one of his most prominent roles, from 1989 to 1996, he led the design team on the restoration of the Great Sphinx at Giza.

Henein studied at the School of Fine Arts in Cairo, graduating in 1953, and then spent time at the Luxor Atelier in Upper Egypt, which aimed to integrate the study of ancient Egyptian art into school curriculums.

Like many Arab artists of his generation, he also studied and worked in Europe. He won a scholarship in 1957 for the Academy of Fine Arts in Munich, and in 1971 he and his wife, anthropologist Afaf Al-Dib, moved to Paris.

There he encountered sculptor Constantin Brancusi, whose clean, sinuous lines can be compared to his work: he mixed the Modernist forms then circulating with his long-standing interest in Egyptian subject matter and motifs.

After he returned to Cairo in the 1990s, Henein also contributed to the infrastructure of the Egyptian art scene. In 1996, he founded the International Sculpture Symposium in Aswan, an ongoing annual event in the Egyptian cultural calendar that now houses an outdoor sculpture garden of works made by visiting artists, crafted from local granite.

In 1998, after leading the design team at Giza, he was recognised for his service by the Egyptian government. His work is included in major Arab art collections, including the Museum of Egyptian Modern Art and his private museum, situated in his former home and studio, a mud brick house in the village of Harraniyya, built in 1968 by architect Ramsis Wissa Wassef.

Henein's work has also been long represented in the UAE, with a show organised by the Abu Dhabi Music & Arts Foundation at Emirates Palace in 2010, and a number of pieces in the Barjeel Art Foundation in Sharjah.

Speaking to The National at the 16th Aswan International Sculpture Symposium in 2011, Henein detailed the dedication the ancient sculptors who inspired him displayed in creating their work. "The ancient Egyptians worked in gangs and it would take several generations to complete just one of the huge statues," he said. "Sometimes, after working on the stone for many years, it would break and have to be abandoned.

"But such was the dedication of the ancients that they would just pick up their simple tools and start on another piece."